Liza Konnikova, MD, PhD, is an attending neonatologist and an assistant professor and early stage investigator in the departments of Pediatrics, Developmental Biology, and Immunology at the University of Pittsburgh School of Medicine. Dr. Konnikova’s research focus is on the development of neonatal immunity at mucosal surfaces and its role in the pathogenesis of diverse diseases such as sepsis, preterm labor, necrotizing enterocolitis and inflammatory bowel disease.

What is your laboratory currently studying?

Currently our lab is focused on studying what the normal development of neonatal immunity at mucosal surfaces looks like rather than studying a specific disorder. However, the disorder that I’ve always wanted to study is necrotizing enterocolitis (NEC), a severe inflammatory disorder of the GI tract that mainly affects very premature infants and has high rates of morbidity and mortality.
The problem with studying NEC is that we don’t understand what normal immunity development is in the fetus and infant, so it is very difficult to come to conclusions or develop theories about what’s wrong with these infants. Our aim right now is to describe what normal immunity is, and then start studying diseases like necrotizing enterocolitis, or preterm labor after we really understand what constitutes normal immunological development.

With a focus on the study of normal immunological development, much of what you do likely involves the gut, where mucosal immunity is very important. Are there other organs or tissue sites that you focus on in terms of normal development?

Our laboratory actually studies two major organ systems that are both barrier sites. One, of course, is the GI tract as noted previously, and the other is the placenta.

A lot is known about the maternal part of the fetal-maternal interface, but very little is actually known about the fetal-maternal interactions. One of the projects in our group, led by Jessica Toothaker, is to figure out how, throughout gestation, the fetus communicates with the mother and then what goes awry to cause such things as preterm labor.

How have technological or clinical influences in the neonatal ICU impacted your research? For example, total parenteral nutrition (TPN) dependence early in life for premature infant populations. How do these kinds of environmental influences affect immunologic fetal and neonatal immunity?

It has been amazing to see that babies as early as 23 to 24 weeks have a good chance at survival. I think the next era in advancement will be to see improvements in survival without morbidities. One of these will certainly entail the immunological development.

The other thing to consider is that a lot of what we have to do to these infants is not normal. They are in incubators. They are in a hospital or in an ICU setting and they might not necessarily receive normal nutrition. How those things contribute to immune development is tricky to study because you have to obtain blood from those babies to study it, and babies have very little amounts of blood we can access for studies.

One of the fellows in my laboratory, Bunmi Olaloye, is working on a project taking tiny amounts of blood, essentially two drops, and trying to do deep immuno-phenotyping, examining what cells are present at weekly or bi-weekly intervals to better understand how environmental factors may be affecting development. It’s an area we currently know little about.

Also, some of my previous work and that of many other groups, has shown that we ought to be feeding our babies. TPN is likely very bad for their guts. Because NEC is such a frightful condition, previous thinking was that not feeding babies would probably be a best practice. However, over the past 10 to 15 years, we have come to realize not feeding is the worst thing for them. We should start feeding them as early as possible. I think the new question to ask and study is: what do we feed them?

What kind of technologies do you employ in your research, and how may the ever-growing improvements in these technologies directly influence the kinds of studies you can undertake and what you may learn?

As I said earlier, normal development has yet to be fully described and understood. One of the reasons is because it is so hard to obtain the necessary tissues for study. The other reason is simply that it is a very difficult area to study. The tissues are very valuable, and you get very little of them. People have studied one specific cell type at a time, be it T cells, B cells, macrophages, etc. It’s a very slow process.

Recent advances in technology have allowed us to look at all the cells at the same time. The technology I use is called CyTOF, or mass cytometry by time-of-flight spectrometry. Because in this technology the antibodies are linked to heavy metals and not fluorophores, you can combine many together in single studies. We routinely combine 40 antibodies at once, which allows us to look at 40-plus different cell types at the same time. Doing so allows for not only the description of what cells are present, but perhaps more important how they interact with each other. Instead of focusing on one particular cell, we focus on the entire tissue. This approach has driven the advancement in the field such that we now see there exists much more cellular diversity and intracellular interactions than we had appreciated.

What are some of the changes in our understanding of mucosal immunity in infants possibly related to the development of NEC?

We used to think that T cells and B cells didn’t play a huge role in infants because, at least in mouse models, the adaptive immune system is really not developed. However, our recent research has upended that thinking and shown that both T cells and B cells are actually quite developed and occupy a large proportion of the gut even in preterm infants as early as 16 weeks gestation. 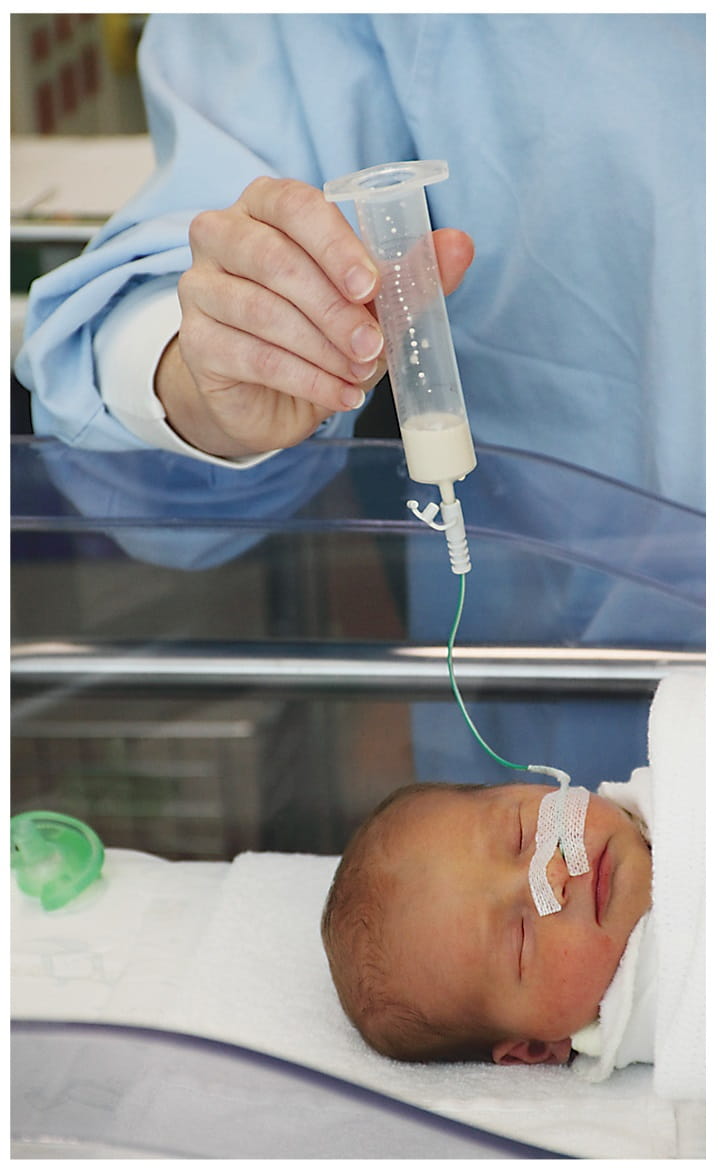 How much do we know about how the immunity develops in utero, and what influence does the maternal-fetal interface play in ultimately providing protection or predisposition to disease, either in infants born prematurely or at normal gestational age?

Right now, we are not really sure about those questions. At present we’ve only examined the neonatal GI tract to significant detail. What we have shown is that as early as 16 weeks gestation, which is very early in the second trimester, all of the major immune populations that are supposed to be there are present in the fetus. Not only are they present but they are functional. The fetal GI immune cells are producing the cytokines that they should be, similar to cytokine production in adult tissues. They’re able to react to stimulation in similar ways to how adult cells react. There are also specific T cells that have retained some immune memory. We have seen the classical markers that are known to be indicative of memory in T cells, and those markers are expressed on the cells in the fetus as early as 16 weeks.

A majority of the pre-setup of what the immune system should be like actually happens in utero. And then once the fetuses are born and are exposed to the microbiome, then there are changes in that immune environment. But the initial environment, or ecosystem between the immune cells, the epithelial cells, and all the other cells that are there is actually quite developed before birth and very early on in development. How that happens, though, we do not yet understand.

This is really the  next question that we hope to answer. My thought is that because fetuses swallow amniotic fluid continuously starting at 14 weeks gestation, they are getting antigens from the mother that cross the placenta into the amniotic fluid and are then ingested. We have shown that development of the immune system occurs much earlier in the small intestine than the large intestine. Consistent with that as the fetus swallows the fluid, it is first going to travel through the small intestine and that system will develop first. Eventually it will reach the large intestine, and then that system will develop. At least that is the hypothesis right now.

Do you have any thoughts, relative to epigenetics circumstances, that what is happening to or in the mother is clearly happening to the child? At these critical stages of immune system development, is that part of the conversation?

That’s a great question. It’s a very difficult thing to study unfortunately. I think because we’re just starting to investigate what normal immunity is like, it is a big unknown. Once we have the normal development well-described then we can start examining these kinds of questions. The maternal part of this is much trickier to study ethically because these are fetal tissues we are dealing with and so we don’t have any information whatsoever on the mother. However, I think as we develop a more detailed understanding of normal development, we can then begin to study all sorts of diseases downstream.