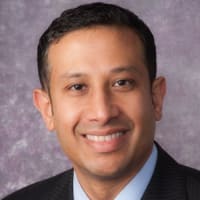 Dr. Mahesh Sharma is an Assistant Professor of Surgery, Department of Cardiothoracic Surgery, University of Pittsburgh. He also is an Attending Surgeon and the Medical Director of Pediatric Mechanical Circulatory Support at Children?s Hospital of Pittsburgh of UPMC.

Dr. Mahesh Sharma is an Assistant Professor of Surgery, Department of Cardiothoracic Surgery, University of Pittsburgh.  He also is an Attending Surgeon and the Medical Director of Pediatric Mechanical Circulatory Support at Children’s Hospital of Pittsburgh of UPMC.  Prior to June 2014, Dr. Sharma was an Attending Surgeon at several Texas hospitals, namely Cook Children’s Medical Center, Ft. Worth, Children’s Medical Center of Dallas, and Methodist Children’s Hospital of South Texas, San Antonio.  At Cook Children’s, Dr. Sharma was also the Director of the Surgical Outreach Regional Heart Program. Dr. Sharma received his BA in Biology with Honors from the University of Austin, Austin, Texas.  It was at Baylor College of Medicine, Houston, Texas, that he earned his MD while working as a Clinical Research Assistant (Thoracic Aortic Surgery) and a Student Research Fellow (Molecular Cardiology) in the DeBakey Department of Surgery.  Dr. Sharma participated as a Resident in General Surgery at Baylor and at Tufts University, Burlington, Massachusetts.  He also completed residencies in Cardiothoracic Surgery at the University of Pittsburgh School of Medicine with Robert Kormos, MD, and at Children’s Hospital with Victor Morell.  In London, United Kingdom, Dr. Sharma was a Specialist Registrar (Fellow) in Paediatric Cardiac Surgery at The Great Ormond Street Hospital for Children. In addition to his clinical duties, Dr. Sharma holds memberships in these professional and academic societies:

Dr. Sharma is the recipient of numerous awards in recognition of his work.  Most recent honors include:

Dr. Sharma supports The International Heart Foundation’s (ICHF) mission is to bring the skills, technology, and knowledge to cure and care for children with congenital heart disease in developing nations.  ICHF does this regardless of country of origin, race, religion, or gender.  Dr. Sharma provided humanitarian assistance in 2014 as a surgeon at the Instituto Nacional del Torax, Tegucigalpa, Honduras. Dr. Sharma’s research interests include: