A 59-year-old man came to the emergency department of a local community hospital with severe substernal chest pain.

This patient was morbidly obese:

At the local hospital, he was noted to have normal cardiac examination; however, his electrocardiogram showed sinus rhythm with ST elevations in leads 2, 3, and aVF with QS complexes in same leads. The patient was also noted to have ST depressions in leads 1 and aVL. Acute coronary syndrome was diagnosed and the patient was sent to tertiary care hospital for emergency cardiac catheterization.

When I arrived to evaluate the patient, he was still having continuous moderate chest pain. His body habitus was such that he could not lay down flat on his back and he was sitting up on the stretcher.

The patient did not have any previous history of ischemic heart disease. This was his first episode of chest pain. He was mildly short of breath and also mildly diaphoretic with a sinus rhythm on the monitor. His vital signs were stable. Past medical history was significant for COPD, possible obstructive sleep apnea, systemic hypertension, and morbid obesity.

At the time of my evaluation, his cardiac exam revealed normal S1 and S2. No cardiac murmurs were present. Examination of the lungs showed decreased sounds at both bases.

The patient was noted to be hyperlipidemic and his laboratory data revealed the following:

His troponin at the local hospital was 13.15, which rose to 38.06 after coronary intervention. 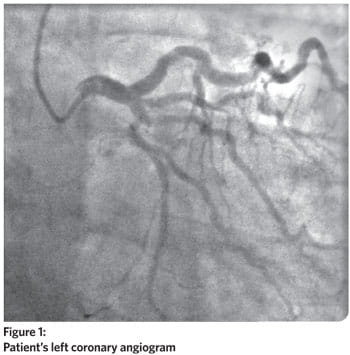 Diagnostic angiography in this patient revealed:

Left ventriculogram was not performed.

Following the transradial PCI, the 6-French sheath was removed from the right radial artery a couple of hours later as per post-PCI protocol. This patient was able to sit up in the bed soon after percutaneous coronary intervention and was able to breathe better and he become comfortable. 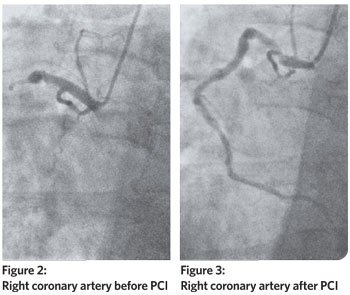 After transradial stent placement of the right coronary artery, (see Figs. 2 and 3) this patient did very well and remained hemodynamically stable with no cardiac decompensation.

His hospital course was uneventful. After 72 hours of observation, the patient was discharged home on dual-antiplatelet therapy, beta-blockers, and statin therapy. The patient would have follow-up in the office and would have sleep study to rule out underlying obstructive sleep apnea.

Because of this patient’s body weight and body habitus, clearly the transradial approach for his coronary intervention was better than the transfemoral approach. I believe that this resulted in less chance of puncture site complications and enhanced the patient’s safety and comfort.

I believe that this case clearly demonstrates the benefits of transradial coronary intervention in STEMI patient as compared to transfemoral with equal efficacy and safety; similar to the conclusions of recently presented RIVAL trial data at this years’ American College of Cardiology annual meeting.