Extracorporeal membrane oxygenation (ECMO) has been performed at UPMC Children’s Hospital of Pittsburgh for almost 40 years, beginning with its first neonatal patient in 1979. Historically speaking, in 1977 Robert L. Hardesty, MD, and Bartley P. Griffith, MD, from the University of Pittsburgh, visited Dr. Robert Bartlett’s ECMO research lab at the University of California, Irvine, with the original intention to begin using ECMO as a modality for postoperative cardiac patients.

After nearly a year of testing and development at the University of Pittsburgh Cardiac Research lab, ECMO support was made available for clinical use at UPMC Children’s Hospital. UPMC Children’s was the second institution in the United States to offer this bypass therapy to neonates, and it also was the second center to join the Extracorporeal Life Support Organization (ELSO) in 1989, an alliance of accredited ECMO centers.

Since its inception, the ECMO Program at UPMC Children’s has treated almost 800 neonates with cardiorespiratory failure. The first neonatal patient managed with ECMO support at UPMC Children’s, a case of congenital diaphragmatic hernia, survived after three days of ECMO bypass.

UPMC Children’s has been an active member of the ELSO registry database, voluntarily reporting on all patients requiring ECMO therapy. The UPMC Children’s ECMO Program has been the recipient of a Gold Level ELSO Award for Excellence in Life Support since 2010 and continues to be recognized as an ELSO Center of Excellence, receiving the designation in reporting years 2010, 2013, 2016, and again in 2019.

In 2009, the Newborn Medicine Program took over ECMO management of newborns and established a certified Neonatal ECMO Program at UPMC Children’s. Burhan Mahmood, MD, was appointed as medical director of the Neonatal ECMO Program and tasked with leading this important transition. Previously, ECMO support for both pediatric and neonatal noncardiac patients was managed by the pediatric intensive care unit (PICU). The UPMC Newborn Medicine Program established guidelines, policies, and procedures for the management of neonatal ECMO patients, and ECMO equipment was updated as necessary to ensure patient safety and outcomes. 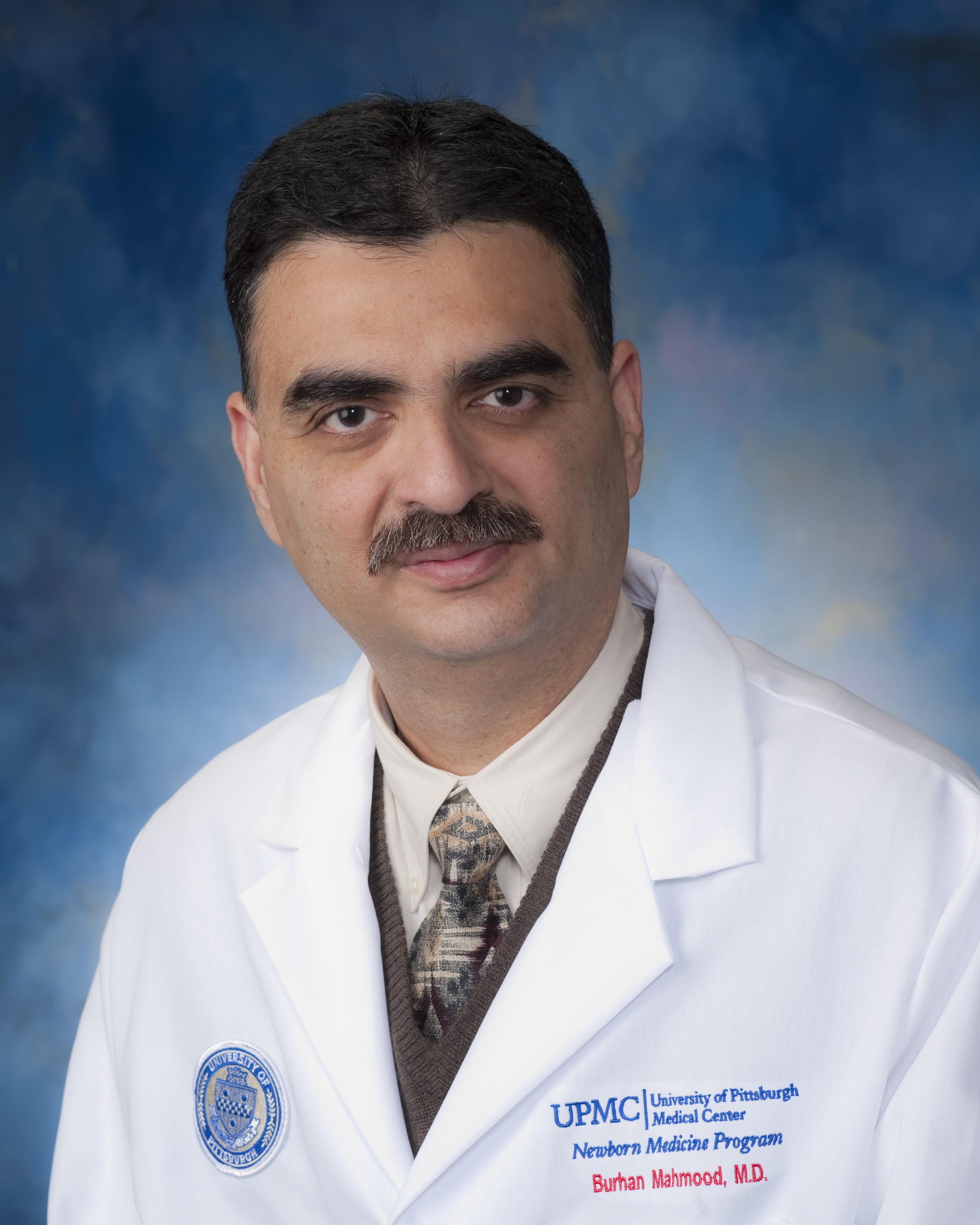 Currently, the Neonatal ECMO Program at UPMC Children’s provides the most advanced forms of life support available to neonates experiencing acute cardiorespiratory failure, and it is the only center in western Pennsylvania to provide extracorporeal support to sick neonates, with ECMO referrals made from all of western Pennsylvania, western West Virginia, and northeastern Ohio.

With the ongoing refinement of ECMO equipment and management strategies during the last five years, neonates are now on the bypass for a shorter duration than before, with fewer complications, while overall survival

has improved significantly to 96 percent coming off ECMO and close to 80 percent at discharge. These neonatal respiratory ECMO outcomes are better than the outcomes reported by other ELSO centers of excellence.

To ensure that all clinicians and advanced practice providers (APPs) become ECMO certified, UPMC Children’s established well-defined in-house training programs and credentialing measures in collaboration with the UPMC Children’s Perfusion Services Department. These measures include clinical case reviews and troubleshooting scenarios with intensive, hands-on ECMO wet lab sessions and ECMO simulation to better understand the nuances of neonatal ECMO management. The wet lab training and ECMO simulation provide a detailed overview of the ECMO circuit, including control and safety mechanisms of the system in a nonclinical setting.

Incoming neonatology fellows, new faculty members, and APPs for the UPMC Newborn Medicine Program receive a basic ECMO course prior to starting clinical service. The course curriculum covers a review of the ECMO equipment, physiology, and patient manage-ment. This initial ECMO certification course is mandatory for new faculty, fellows, APPs, and nurse practitioners before they can start caring for ECMO patients. Completion of ECMO educational, simulation, and training sessions — especially involving the equipment — are required for faculty, fellows, and advanced practice providers for ECMO certification. 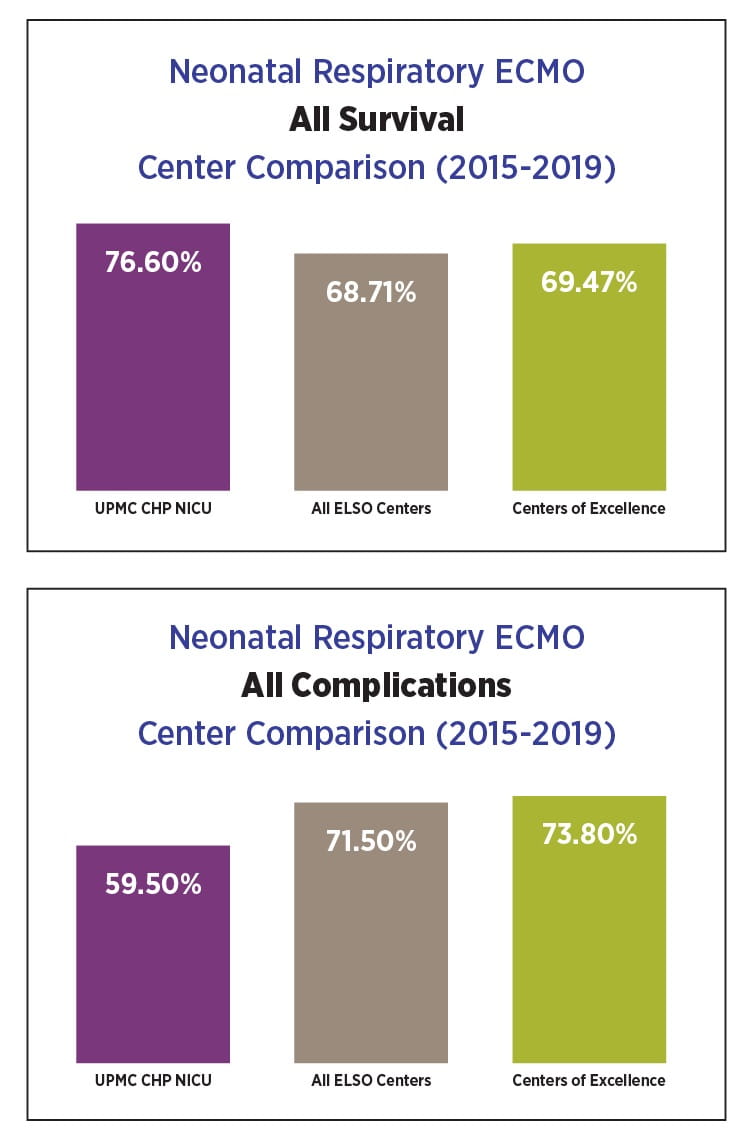 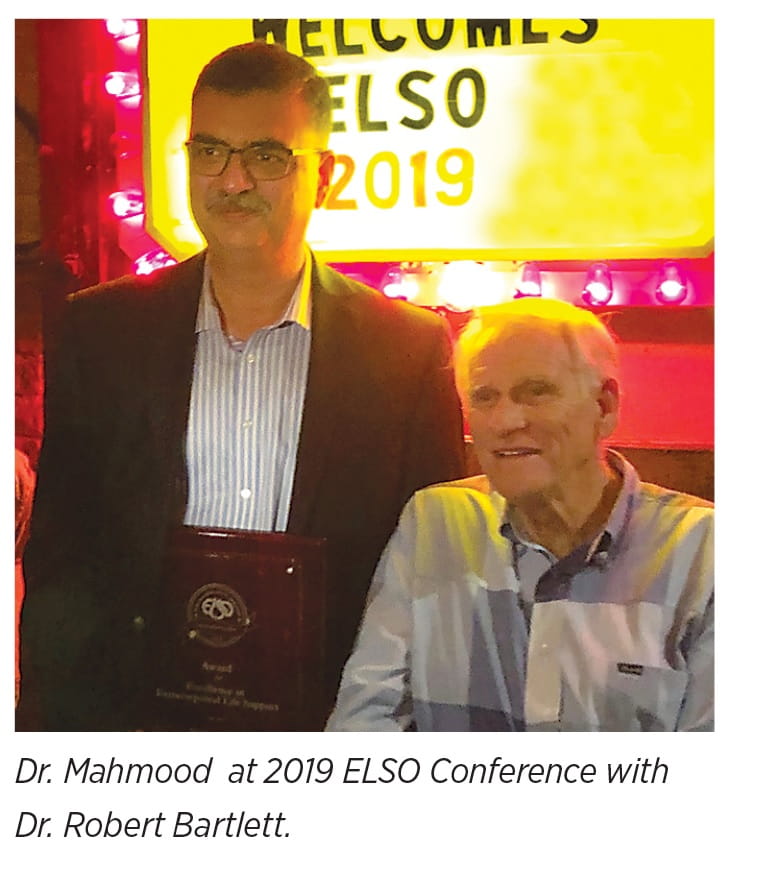 Moving forward, the quality of ECMO education and training is being enhanced by employing newer educational and training resources for the neonatal staff, physicians, and APPs. These measures include computer-based learning models, online content, and the development of more robust high-fidelity ECMO simulation models. The ECMO training program will collect performance data after caregivers complete teaching modules and complete online testing. This information will be utilized to assess how the program can be improved, and then required changes will be implemented. These initiatives will provide a quality learning experience and further enhance neonatal ECMO education and training and promote excellent patient outcomes

The UPMC Newborn Medicine Program has established an ECMO track within the UPMC Neonatal-Perinatal Medicine fellowship program to provide advanced training for fellows who are interested in enhancing their ECMO experience as a career pathway. Neonatology fellows have the option to participate in this advanced ECMO training to build this skill set, particularly if they have career plans to work at an ECMO center.

Completion of this advanced ECMO experience is noted as an additional mastered skill set at the time of the fellow’s graduation from the program. This training occurs in all the critical care units of UPMC Children’s and consists of bedside ECMO pump management with the perfusionist, attendance at cannulation/decannulation, priming procedures of the ECMO system, troubleshooting drills including emergency circuit change, and participation in the design of ECMO simulations. Completion of this program requires attendance at the UPMC Children’s ECMO Specialist Training Course and successful completion of the Neonatal ECMO Training Exam to ensure ECMO certification at the time of graduation from the fellowship program.