In May 2019, Jason Luke, MD, joined the faculty of UPMC Hillman Cancer Center as director of its new Cancer Immunotherapeutics Center and is associate professor of medicine at the University of Pittsburgh School of Medicine. 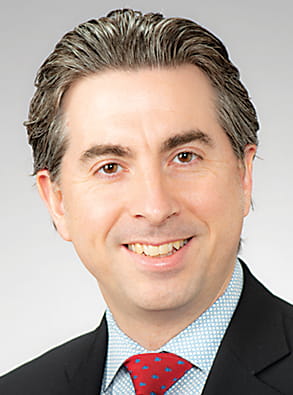 “Immunotherapy is a different approach to treating cancer than we have seen historically, such as with chemo-therapy or targeted therapies,” says Dr. Luke. “We’re treating the patient’s body, not the cancer, and therefore the treatment is potentially applicable to a broad swath of cancer types. This requires a redesign of the way we do clinical research.”

The Cancer Immunotherapeutics Center was created to speed the most promising new immunotherapies toward large clinical studies. “We are currently conducting or preparing to launch early-phase trials on all aspects of immunotherapy, for diseases ranging across the spectrum of cancer, from melanoma to pancreatic cancer to hematologic cancers,” says Dr. Luke.

Emergence of the First Immunotherapies

Dr. Luke developed an interest in immunology as an undergraduate at the University of Iowa, where he worked in a laboratory, studying mouse models of T cell lymphoma. His interest in the immune system continued after he entered medical school at the Rosalind Franklin University of Medicine and Science in Chicago and eventually led him to a rotation in the clinical immunology program at Memorial Sloan Kettering Cancer Center in New York. After graduating from medical school in 2006, Dr. Luke completed his internship and residency in internal medicine at Boston University Medical Center, followed by a medicine fellowship at Weill Cornell Medical Center in New York and a medical oncology fellowship at Sloan Kettering.

“I was fortunate to be in the thick of it when the seminal clinical trials in melanoma of the first modern cancer immunotherapy agent, ipilimumab, were underway,” says Dr. Luke. “Those trials fundamentally altered the way we treat metastatic cancer. We saw some patients who were treated with immunotherapy achieve long-term treatment responses. That is just not what we saw otherwise with metastatic cancer. This drove home to me that, in terms of advancing cancer therapy, the highest upside would be in the realm of immunotherapy.”

Dr. Luke joined the faculty of Dana-Farber Cancer Institute and Harvard Medical School in 2012 just as the next generation of immune checkpoint inhibitors, the PD-1 and PD-L1 antibodies, were being tested in clinical trials. This class of drugs would further revolutionize the treatment of metastatic cancer across tumor types.

“Working on these trials helped me find my niche, marrying my interest in early-phase drug development with immunotherapeutics,” he says.

“The scale and science of UPMC Hillman Cancer Center will give me an opportunity to expand the horizons of my research with immunotherapy in ways that wouldn’t otherwise have been possible,” says Dr. Luke.

Flipping the Approach to Early-Phase Trials

The new Cancer Immunotherapeutics Center is focusing exclusively on early-phase clinical trials of new immunotherapeutic agents. The way these treatments interact with the human body has required a rethinking and reorganizing of how early-phase trials are run, says Dr. Luke.

“Historically, in early-phase clinical trials of a new agent, we would administer the drug in increasing doses until we reached the maximum tolerated dose. Then we would sometimes do another trial to confirm the dose or look for early signs of activity. Evaluating therapeutic effectiveness often was not a primary intent of these early-phase trials. With the broad applicability of immunotherapy, that’s completely flipped on its head,” says Dr. Luke.

Because dose-related toxicities are much less likely to be observed in early-phase trials of immunotherapies, these trials often immediately begin to assess the clinical benefit of a new agent.
The sheer number of immunotherapy drugs currently under development necessitates rapid decision making about which agents should move forward into larger trials.

“We’re looking for agents that generate a substantial response in early-phase trials. The Cancer Immunotherapeutics Center will enable us to organize and prioritize those clinical trials that we believe are going to have the biggest impact,” says Dr. Luke.

The multidisciplinary team at the Center already has opened multiple early-phase trials that are now enrolling patients, and they expect to start more than 20 more by early 2020. These trials will address the full range of immunotherapeutic modalities, including immune checkpoint antibodies, small-molecule innate immune agonists, bispecific immunotherapies, cellular products, immunometabolism modifiers, and more.

Searching for the Drivers of Response

Dr. Luke’s ambitions for the new Center go beyond clinical trials. He has a research interest in understanding the factors that lead some patients to respond dramatically to immunotherapy while others do not.

“We observe even before treatment that some patients with cancer have already mounted an immune response. Where we currently see cancer immunotherapy being the most effective, is in those patients who have evidence for this in the tumor. Unfortunately this isn’t necessarily the majority of patients who have this,” says Dr. Luke.

In a paper published in Clinical Cancer Research in May 2019, Dr. Luke and his colleagues reported the results of an analysis of gene-expression signatures across various cancer types. They found that a cell-signaling pathway involving b-catenein tended to be activated in tumors that could escape T cell infiltration. Using drugs to block this pathway may be a novel way to give an upper hand to the body’s immune cells.

This variation in response may result from differences in tumors, such as different mutations or different numbers of mutations, or from variations in individuals’ DNA, also known as the germline.
“Another hypothesis is that the microbiome — the bacteria and other microorganisms that we have been exposed to, the microorganisms we carry as commensal parts of ourselves — affects our ability to mount an immune response in ways we do not yet adequately understand.” says Dr. Luke.

His team is planning to conduct large scale molecular sequencing studies to examine all three of these factors. The hope is that these profiles will contribute to creating predictive models to optimize the selection of new drugs to test in clinical trials, as well as to predict which patients may benefit from those drugs.

The payoff from these efforts will come over time as immunotherapy clinical trials, biobanking and specimen sequencing expands throughout the UPMC cancer network. Already however, the expanding clinical trial portfolio within the Cancer Immunotherapeutics center is offering patients access to therapies not previously available.

“Beyond drug development, we are aiming to bring personalized medicine to as many UPMC  patients as possible,” says Dr. Luke.