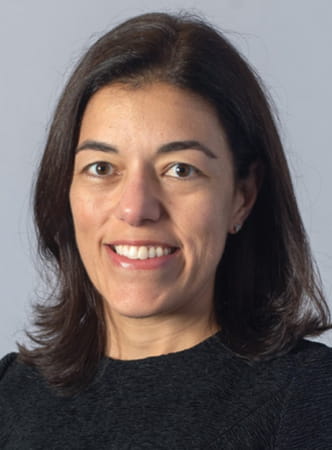 What Are the Neuroendocrine Adaptations to Starvation?

During periods of low caloric intake, energy utilization is shifted away from processes that are not critical for survival. Two of these processes are reproduction — which is important for the survival of our species but not critical for the survival of an individual — and IGF-I dependent processes, which include maintenance of bone mass in adults. Therefore, hypogonadotropic hypogonadism (or functional hypothalamic amenorrhea in women) and growth hormone resistance are two neuroendocrine adaptations that help preserve energy in states of low nutrient intake (See Figure 1). 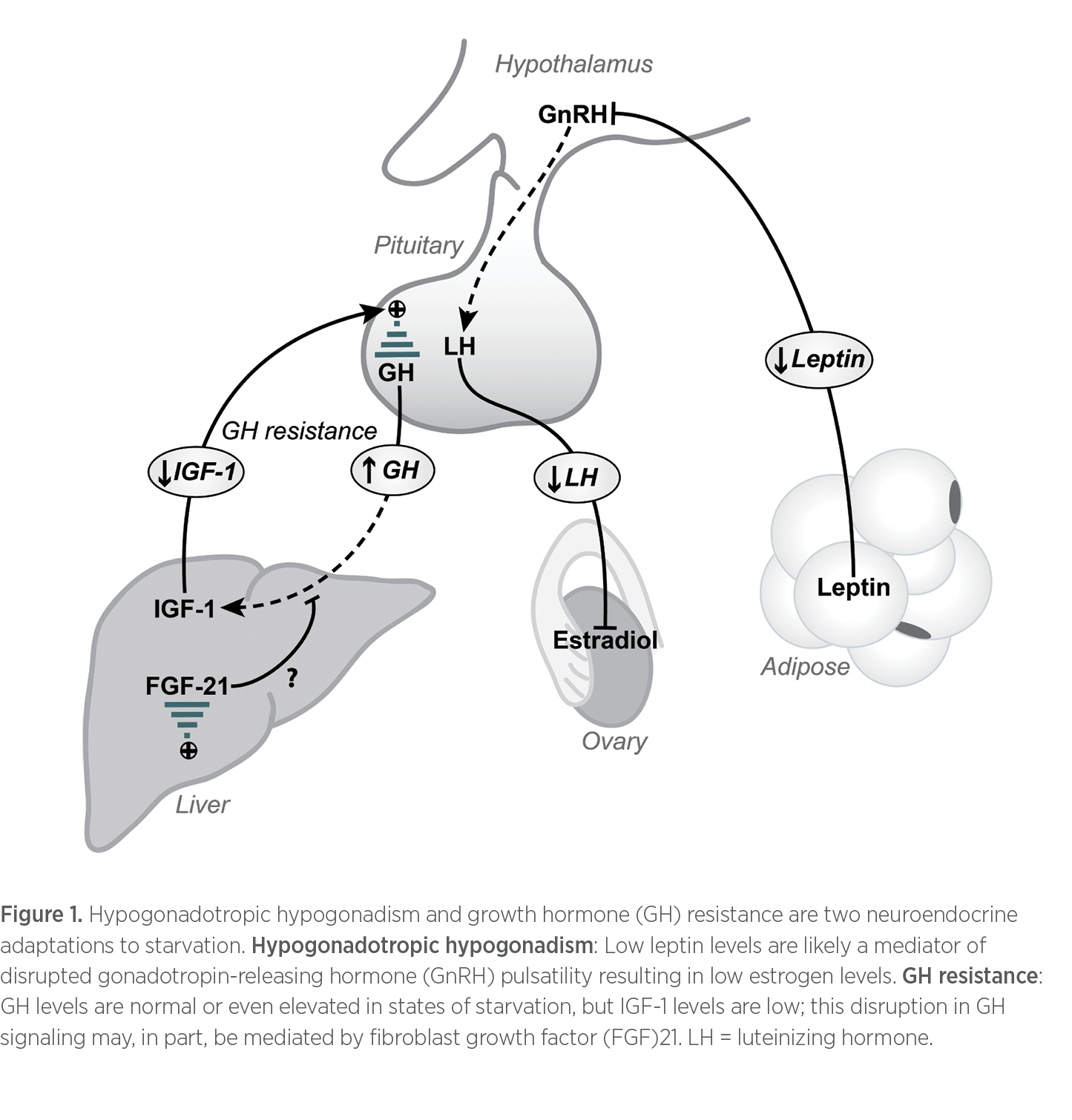 Hypogonadotropic hypogonadism is a common finding in individuals who are expending more energy than they are consuming. In premenopausal women, this is a common cause of amenorrhea — termed functional hypothalamic amenorrhea. In states of chronic undernutrition, hypogonadotropic hypogonadism is characterized by disrupted gonadotropin-releasing hormone pulsatility,1 and low leptin levels likely mediate this. Levels of leptin, a hormone secreted primarily by subcutaneous adipose tissue, drop by approximately 50% within 24 hours of an acute fast2 and women in a state of negative energy balance with functional hypothalamic amenorrhea have low leptin levels and decreased luteinizing hormone pulsatility. Treatment with recombinant human leptin in women with functional hypothalamic amenorrhea increases luteinizing hormone pulse frequency after two weeks of treatment, and ovulation and recovery of menses occur in a substantial portion of these women after three months of treatment.3 Therefore, low levels of leptin appear to be an important intermediary between nutrient stores/intake and the hypothalamic-pituitary-gonadal axis.

Growth hormone resistance is another neuroendocrine adaptation to starvation. Growth hormone (GH) has both growth-promoting effects, mediated in part by IGF-1, but also lipolytic and insulin-resistant actions, which likely help us maintain euglycemia during periods of fasting.4 Therefore, it is advantageous for GH levels to be normal or elevated during periods of caloric deprivation. In contrast, utilizing energy on growth during periods of starvation is not advantageous. In individuals with appropriate nutrient intake, GH stimulates IGF-1 production by the liver, whereas in states of undernutrition, GH levels are normal or even elevated, but IGF-1 levels are low — a state of growth hormone resistance.

In animal models, FGF21, a starvation-induced hormone, has been shown to be a mediator of GH resistance,5 and we have demonstrated an association between GH resistance and FGF21 in a human model of chronic starvation,6 but additional mediators of GH resistance in human starvation also likely exist.

Although both hypogonadotropic hypogonadism and GH resistance are critical for our survival during periods of low caloric intake, these adaptive responses have long-term negative consequences. Anorexia nervosa is a psychiatric disorder primarily affecting women, which is characterized by self-induced starvation. This disorder is prevalent in premenopausal women and serves as a human model of chronic starvation. Nearly 90% of women with anorexia nervosa have low bone mass, defined as bone mineral density values more than one standard deviation below those of normal-weight women of comparable age, and there is an increased rate of fracture in this population.7 Both the duration of amenorrhea8 and low IGF-1 levels9 are associated with low bone mineral density in women with anorexia nervosa, suggesting that functional hypo-thalamic amenorrhea and GH resistance have long-term negative effects on bone metabolism.

Are There Any Potential Benefits of Starvation?

With recent studies suggesting the metabolic benefits of intermittent fasting, the question arose whether a brief period of starvation would have metabolic benefits in normal and overweight individuals. In collaboration with Matthew Steinhauser, MD, of the Aging Institute and Division of Cardiology at the University of Pittsburgh School of Medicine, we conducted a 10-day zero-calorie fast in healthy, normal, and overweight individuals.2,13 Subjects were admitted to the Clinical Research Center for 10 days and were administered a multivitamin and 20 mEq of potassium chloride daily and were permitted to drink water ad-lib. Subjects, who lost between 7% and 11.7% of their initial body weight, tolerated the fast remarkably well with only two of the 12 subjects self-discontinuing the study protocol.2 We performed plasma metabolite profiling in these subjects and, not surprisingly, we found a shift in circulating metabolites over the course of the fast.

What was unexpected was that we found a preferential shift towards triglycerides with a higher carbon content and with a greater number of double-bonds during the fast, and this metabolite profile persisted even after one day of refeeding.2

This particular metabolite profile has been shown to be associated with a lower risk of diabetes mellitus using longitudinal data from the Framingham Heart Study,14 suggesting that there may be a potential metabolic benefit to an acute period of prolonged fasting.

Humans have evolved with a number of neuroendocrine adaptations that are critical for survival during periods of low or no caloric intake. Two of these adaptations, hypogonadotropic hypogonadism and growth hormone resistance, reduce energy expenditure during periods of starvation but are also associated with low bone mass and an increased risk of fracture long term. In contrast, in normal and overweight individuals, an acute 10-day fast is associated with a beneficial metabolic profile. Therefore, further study is necessary to better delineate both the beneficial and detrimental effects of starvation.