The Importance of a Multidisciplinary Approach 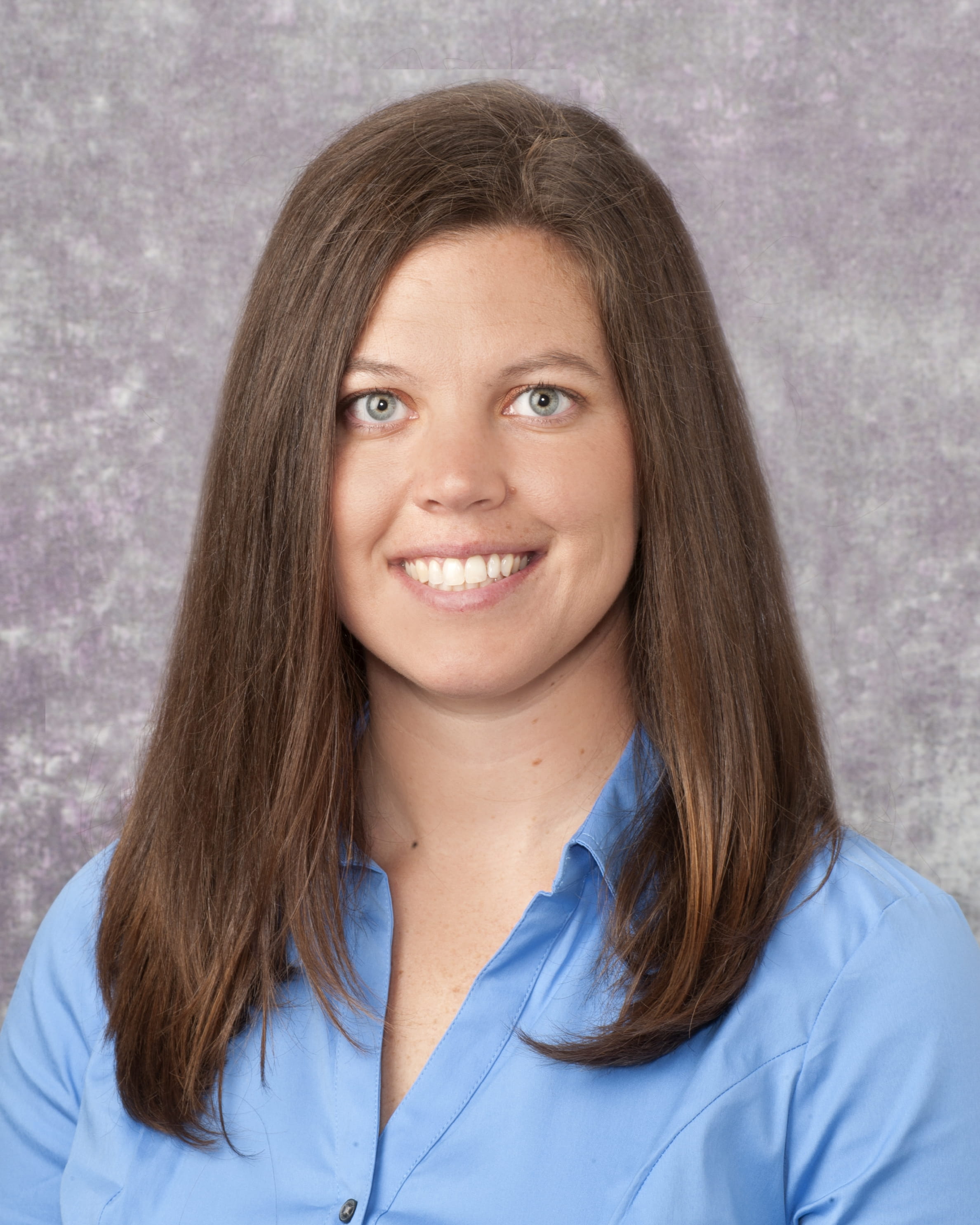 Geriatric hip and femur fractures occur at a rate of more than 300,000 per year and are expected to reach 500,000 by 2040.1 Unlike some other osteoporotic fractures, these most commonly require inpatient hospitalization and surgical intervention, making them the most expensive fragility fractures to treat, costing an estimated $12 billion U.S. dollars per year.2 Patients who sustain low energy fractures of the hip and femur are generally frail and have significant medical comorbidities, such that geriatric hip and femur fractures often are considered to be a marker of declining overall health.

Thirty-day mortality has been reported to be approximately 11%, and one-year mortality following these fractures reaches 36%.3 Aside from the known high rates of mortality, rates of systemic postoperative complications, including venous thromboembolism, pneumonia, cardiac events, urinary tract infections, delirium, and pressure sores, are alarming. Local complications, including nonunion, malunion, and infection, are less common but certainly significant.

With a thorough understanding of the high rates of local and systemic complications, including mortality, it is important to evaluate what modifiable factors exist, which, if controlled for, can allow a reduction in rates of complication and improvement in outcomes. It also is important to consider care pathways that facilitate consistent and efficient acute and long-term patient care.

Deferring surgery in high-risk patients can be considered. However, nonoperative management of hip fractures is associated with even higher mortality than operative treatment, with one series reporting 30-day mortality of over 30% and one-year mortality of over 50%,4 which is two to three times the reported rates following operative treatment. More clearly demonstrating the effect, a matched cohort study of operatively and nonoperatively treated hip fractures found that mortality was significantly higher at all time points in the nonoperatively treated group, including 28% versus 4% in hospital, 63% versus 11% 30-day, and 85% versus 36% one-year mortality.3

Aside from its effect on mortality, surgical treatment of hip and femur fractures can be considered a palliative operation even in high-risk patients as it allows for improved pain control and mobility. Therefore, while it may be tempting to avoid operation in such high-risk patients, in the vast majority of cases surgery provides both a reduction in mortality and functional benefit.

While hip fractures have long been recognized for their implications to overall health, distal femur fractures are only more recently gaining notoriety. Importantly, the physiology of the populations is the same, with comparable comorbidities and mortality rates.5 However, distal femur fractures are associated with higher rates of local complications, including nonunion and malunion. Intramedullary nailing, a common treatment of intertrochanteric hip fractures, is associated with a failure rate of around 3%.6 On the other hand, the standard treatment of distal femur fracture with laterally based locked plating has been reported to have a nonunion rate of up to 25%, many of which require reoperation.7 High failure rates have led to the evolution of treatment constructs, including those which span the whole bone, intramedullary nailing instead of plating (Figure 1), and primary distal femoral arthroplasty (Figure 2)8 in attempts to minimize reoperation and facilitate early mobility. 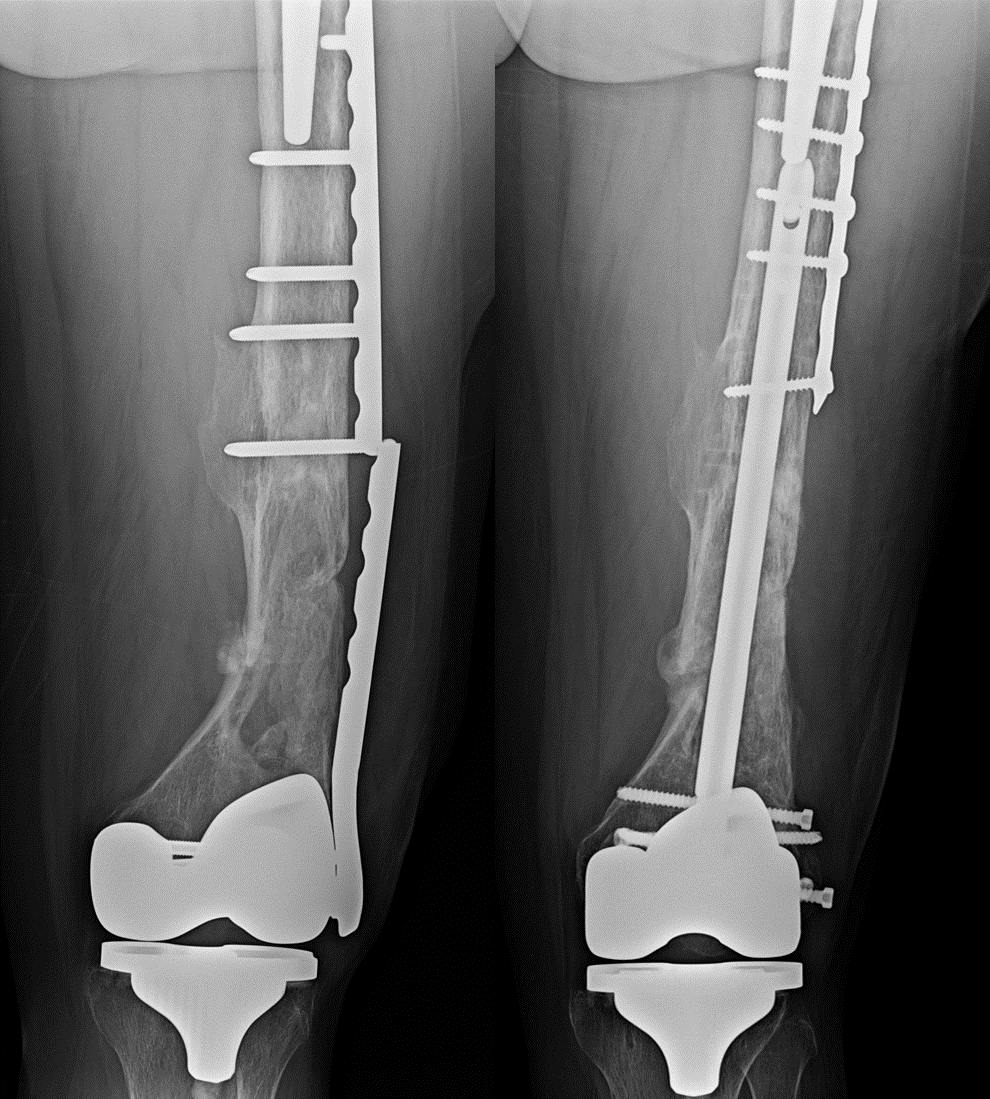 Interprosthetic supracondylar femur fracture initially treated with a lateral plate subsequently went on to nonunion and plate breakage (left). This was revised to an intramedullary nail and healed uneventfully (right). 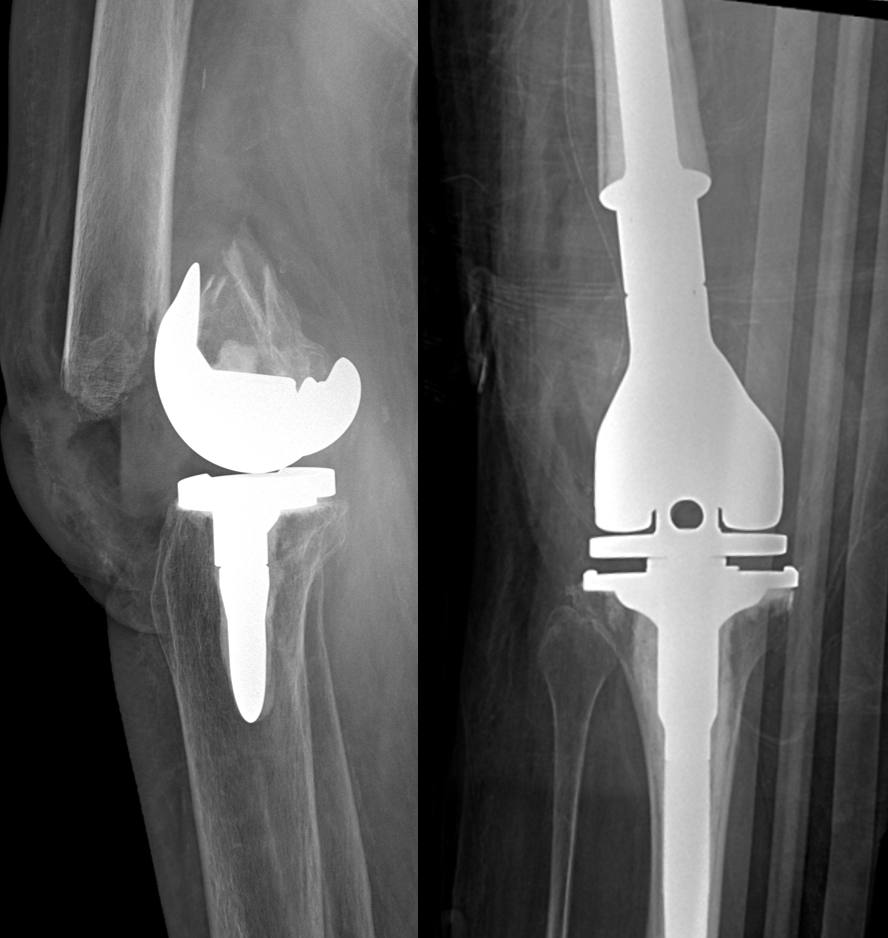 Investigation into the optimal treatment of geriatric femur fractures from a technical perspective is ongoing but only represents a small part of the spectrum of care needed in managing these complex patients.

The average geriatric hip or femur fracture patient has extensive comorbidities and requires a thorough preoperative evaluation to identify modifiable risk factors before proceeding with surgical treatment. By acknowledging the complexity of these patients, and engaging both orthopaedics and internal medicine or geriatric physicians at the time of presentation, care can be improved. The internal medicine or geriatric physician is critically important in providing risk stratification and preoperative optimization of medical comorbidities.

However, the role of the internal medicine physician does not stop when the patient has been optimized for surgery. Co-management of patients throughout their hospital stay has been linked to decreased postoperative complications and shorter length of hospital stay.9,10

A recent systematic review (one which evaluated 17 studies comparing orthopaedic-led care models to geriatric-led or combined care models in the care of hip fracture patients) demonstrated significant decreases in time-to-surgery, hospital length of stay, postoperative mortality rates, and costs when a geriatrics-led or orthogeriatrics combined care model was used,11 thus emphasizing the importance of a true co-management approach.

While it may seem that involving more physicians in a patient’s care would add cost in this era of increasing cost-consciousness and bundled payments, co-management services have proven to be cost-effective and potentially reduce costs in higher volume centers.12,13

Once a decision is made to proceed with operative treatment, one of the most well understood modifiable risk factors in the care of geriatric femur fracture patients is the timing of surgery. Delaying surgical treatment of hip fractures for more than 48 hours after the initial fracture has been shown to result in increased morbidity, mortality, and length of hospital stay.14 While there is no documented benefit to immediate surgery (less than six hours from admission),15 efficient optimization and operation (within 24 to 48 hours) is consistently linked to improved outcomes.

In order to facilitate timely surgery, both anesthesia and internal medicine/geriatric physicians must be involved from the early preoperative period. The presence of a documented care pathway agreed upon by orthopaedics, internal medicine, and anesthesia has proven to be effective in minimizing delays to surgery and avoiding unnecessary testing.16,17

One of the main goals of early hip and femur fracture surgery is to facilitate mobilization and decrease rates of complications associated with immobility. The odds of developing a postoperative complication nearly double in patients who remain bedbound when compared to those who mobilize, and the effect is largest in patients with poorer preoperative health.24 While it is often challenging to mobilize patients in the early postoperative period, lower in-hospital mortality is seen in patients who walk within 24 hours of surgery.25

We have recently investigated the role of formal physical therapy following hip fracture surgery at UPMC and found that patients who received formalized physical therapy on the day of surgery had significantly decreased length of stay when compared to those who did not. This would suggest that formalizing rehabilitation pathways while in the inpatient setting may be beneficial in improving outcomes.

Fracture Liaison Services are designed to facilitate appropriate evaluation and treatment of osteoporosis following a fragility fracture. Multidisciplinary in their own right, they often include orthopaedic surgeons, primary care physicians and providers, endocrinologists, and nurse coordinators to help ensure appropriate bone density testing, medication management, and regular follow-up, as well as the seamless transition of care to the patient’s preexisting primary care provider. These systems consistently have been shown to significantly decrease mortality and incidence of refracture following geriatric femur fracture.28 Additionally, despite involving additional resources, they also have been proven to be cost-effective.29

Geriatric femur fractures are more than just an orthopaedic problem. Without minimizing the technical challenges of treating osteoporotic fractures, it is important to recognize the broader implications. These fractures serve as a marker of frailty and are associated with a high risk of morbidity and mortality, loss of independence, and high cost of care. From arrival at the hospital to long after discharge, optimal care demands attention to detail, well-defined care pathways, and the involvement of a wide range of services.

Learn more about the UPMC Division of Geriatric Medicine and Department of Orthopaedic Surgery.