Dr. Alison Morris named chief of the Division of PACCM

After an extensive national search, Alison Morris, MD, MS, has been appointed chief of the Division of Pulmonary, Allergy and Critical Care Medicine (PACCM) beginning July 1, 2019. She is currently the vice chair for Clinical Research in the Department of Medicine, and she has successfully led PACCM as interim chief during the transition period since the departure of Rama Mallampalli, MD, in the fall of 2018. Dr. Morris is a professor of medicine with secondary appointments in Immunology and Clinical and Translational Research. She holds the UPMC Chair of Translational Pulmonary and Critical Care Medicine, and she is director of the University of Pittsburgh HIV Lung Research Center as well as director of the Center for Medicine and the Microbiome. 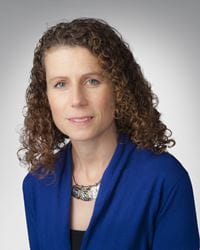 Dr. Morris graduated from Harvard College (magna cum laude and Phi Beta Kappa) and attended medical school at Duke University, where she was a member of Alpha Omega Alpha. She completed an internal medicine residency and fellowship in pulmonary and critical care at the University of California, San Francisco. Her research there focused on pulmonary complications of HIV infection and transmission of Pneumocystis. She then moved to the University of Pittsburgh, where she completed additional critical care training and obtained a master’s degree in clinical research. She was awarded a K23 examining the contribution of Pneumocystis colonization to lung disease, before moving to the University of Southern California, where she was on faculty for three years. In 2006, Dr. Morris was recruited back to the University of Pittsburgh and was promoted to associate professor of medicine in 2008 and professor of medicine in 2016.

Dr. Morris’ recent work has evaluated the role of the lung microbiome in both HIV-associated lung diseases as well as other chronic lung diseases such as COPD and sarcoidosis. She has been continuously funded by NHLBI since 2003 and currently holds two R01 awards as principal investigator, a UM1 award as the site principal investigator and is project leader on a P01 award. Dr. Morris has participated in, and chaired, several multi-center research consortia investigating HIV-associated pulmonary disease and the lung microbiome. She has authored over 100 peer-reviewed research papers as well as chapters in Harrison’s Internal Medicine, Cecil’s Internal Medicine, and Murray and Nadel Textbook of Pulmonary Medicine. Morris was elected to the American Society of Clinical Investigation in 2012, the American Association of Physicians in 2019, and she has been a visiting professor at the University of California San Francisco, the University of Pennsylvania, and Yale University, where she was named the first Sreedhar Nair Visiting Professor. She has served on study sections for the NIH, American Lung Association, and the VA, and is a member of the U.S. Public Health Service, the Infectious Diseases Society of America Prevention, and the Treatment of Opportunistic Infections Working Group.

Dr. Morris is committed to mentoring residents, medical students, and fellows. She has served on multiple thesis advisory committees and previously co-directed the residency LEAD program. Her trainees have been awarded multiple grants and awards including F32s, K23s, NIH Loan Repayment grants, and Parker B. Francis fellowships. She directs the PACCM T32 training grant and was recently awarded a K12 training program through NHLBI while concurrently holding a K24 mentoring award.

In addition to her considerable research and mentoring roles, Dr. Morris continues clinical work in the medical intensive care unit. She brings a wealth of experience in clinical academic medicine, and she is highly regarded as a physician-scientist and a passionate mentor both inside and outside the University of Pittsburgh and UPMC.