Imagine tying your shoes or taking a sip of coffee or cracking an egg but without any feeling in your hand. That’s life for users of even the most advanced prosthetic arms.

Although it’s possible to simulate touch by stimulating the remaining nerves in the stump after an amputation, such a surgery is highly complex and individualized. But according to a new study from the University of Pittsburgh’s Rehab Neural Engineering Labs, spinal cord stimulators commonly used to relieve chronic pain could provide a straightforward and universal method for adding sensory feedback to a prosthetic arm.

For this study, published today in eLife, four amputees received spinal stimulators, which, when turned on, create the illusion of sensations in the missing arm. 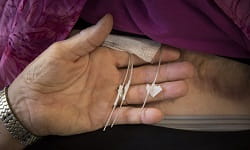 “What’s unique about this work is that we’re using devices that are already implanted in 50,000 people a year for pain — physicians in every major medical center across the country know how to do these surgical procedures — and we get similar results to highly specialized devices and procedures,” said study senior author Lee Fisher, PhD, assistant professor of physical medicine and rehabilitation, University of Pittsburgh School of Medicine.

The strings of implanted spinal electrodes, which Fisher describes as about the size and shape of “fat spaghetti noodles,” run along the spinal cord, where they sit slightly to one side, atop the same nerve roots that would normally transmit sensations from the arm. Since it’s a spinal cord implant, even a person with a shoulder-level amputation can use this device.

Fisher’s team sent electrical pulses through different spots in the implanted electrodes, one at a time, while participants used a tablet to report what they were feeling and where.

All the participants experienced sensations somewhere on their missing arm or hand, and they indicated the extent of the area affected by drawing on a blank human form. Three participants reported feelings localized to a single finger or part of the palm.

“I was pretty surprised at how small the area of these sensations were that people were reporting,” Fisher said. “That’s important because we want to generate sensations only where the prosthetic limb is making contact with objects.”

Although some degree of electrode migration is inevitable in the first few days after the leads are implanted, Fisher’s team found that the electrodes, and the sensations they generated, mostly stayed put across the month-long duration of the experiment. That’s important for the ultimate goal of creating a prosthetic arm that provides sensory feedback to the user.

“Stability of these devices is really critical,” Fisher said. “If the electrodes are moving around, that’s going to change what a person feels when we stimulate.”

The next big challenges are to design spinal stimulators that can be fully implanted rather than connecting to a stimulator outside the body and to demonstrate that the sensory feedback can help to improve the control of a prosthetic hand during functional tasks like tying shoes or holding an egg without accidentally crushing it. Shrinking the size of the contacts — the parts of the electrode where current comes out — is another priority. That might allow users to experience even more localized sensations.

“Our goal here wasn’t to develop the final device that someone would use permanently,” Fisher said. “Mostly we wanted to demonstrate the possibility that something like this could work.”

This study was funded by the U.S. Army Research Office and the Defense Advanced Research Projects Agency (grant number W911NF-15-2-0016).