Abdominal aortic aneurysm (AAA) is a significant cause of mortality in older persons, representing the 15th leading cause of death overall in the United States. When symptomatic, AAA repair is associated with poor survival rates. As such, once the AAA has enlarged to an appropriate diameter, typically 5.5 cm, prophylactic repair is advocated by multiple specialty society guidelines to prevent rupture and death. Most AAA are fusiform, implying generalized dilation of the vessel. However, some AAA exhibit localized dilation and are then described as being saccular. Saccularmorphology may be associated with significant localized wall stress and as such confers an increased risk of rupture. As a result,repair is generally undertaken at smaller diameters.

These vessels can also suffer from pseudoaneurysms. Whereas a true aneurysm involves dilation of all the layers of an artery(i.e. intima, media, and adventitia), a pseudoaneurysm involves dilation of a subset of those layers, typically the media. The net effect is the creation of a pocket of moving blood connected to the main part of the artery through a small opening or neck. The pocket may be partly surrounded by thrombus.

Aneurysmal disease can also affect the arteries that feed the liver, spleen, intestines,or kidneys. These are uncommon. However, these can also rupture, and prophylactic repair once they reach 2 cm in diameter is frequently performed.

We present here an unusual case of a woman with an abdominal aortic pseudoaneurysm associated with an accessory renal artery.

A 68-year-old female with a history of  hypertension and hyperlipidemia had been recently diagnosed with breast cancer. Of interest, she had no history of any rheumatologic disorders, nor any active infection. She underwent mastectomy and was in complete remission. She was subsequently being evaluated for breast reconstruction by Plastic Surgery. This required a CT scan of the abdomen and pelvis, which disclosed the presence of an abdominal aortic pseudoaneurysm closely associated with an accessory renal artery (Figures 1a and 1b). The portion that emanated from the accessory right renal artery measured approximately 2.1 x 2.6 cm. 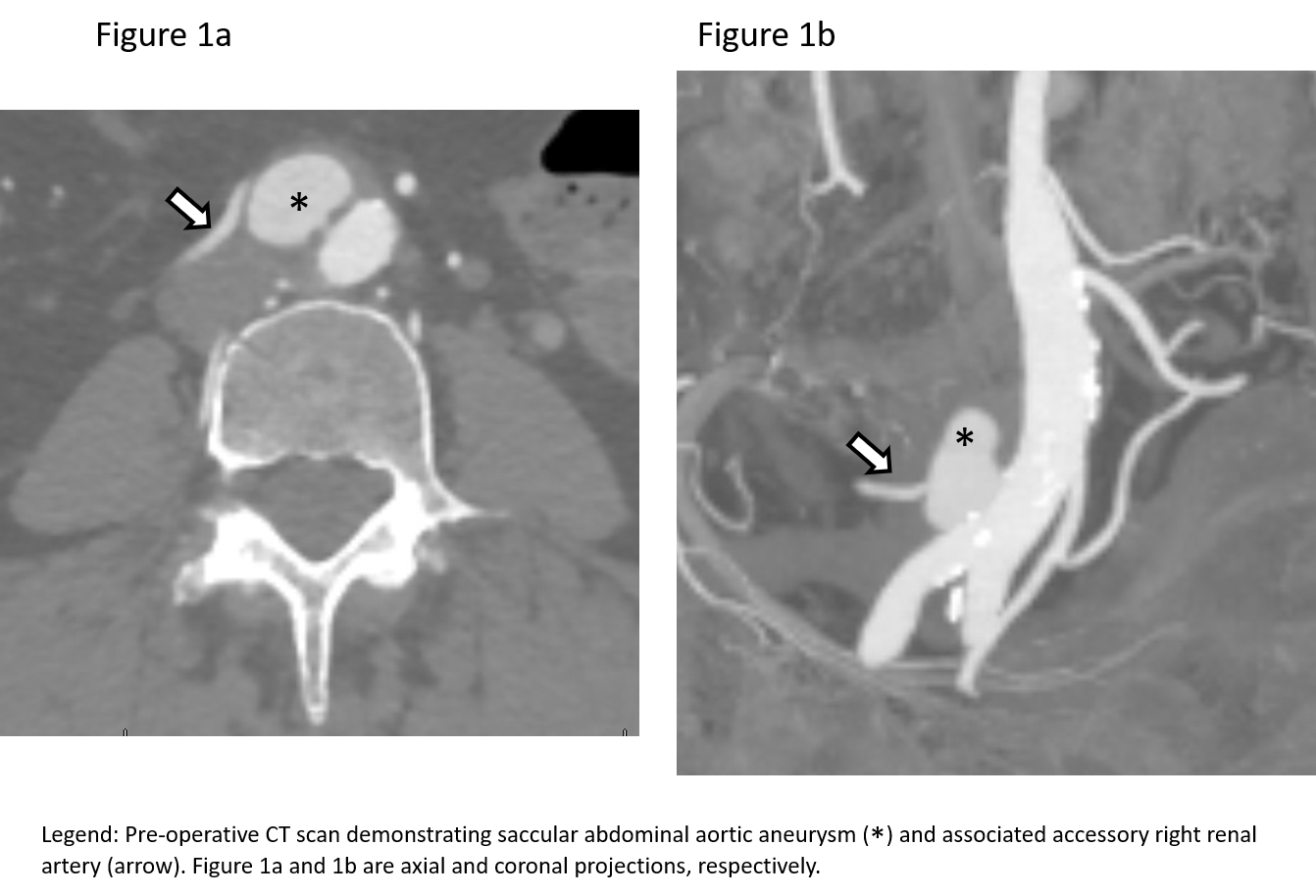 Due to its location and geometry, it also gave the appearance of being a localized aortic dissection. She was completely asymptomatic and denied any history of abdominal or flank pain. She denied arterial surgery. Review of a CT scan obtained 10 years ago did not demonstrate any abdominal arterial abnormalities. Her physical exam was completely benign with normal femoral and lower extremity arterial pulses.

In consultation with her plastic surgeon, it was felt that it would be safe to proceed with her breast reconstruction. After she had healed, she was re-evaluated. While she remained asymptomatic, given the size and geometry of the pseudoaneurysm, the decision was made to proceed with repair.It appeared well suited for an endovascular approach, which was expected to expedite her recovery as compared to open surgery.

The patient was brought her to the hybridangiography suite. After obtaining femoral arterial access, a selective catheter was used to access the outflow of the pseudoaneurysm, and subsequently coil embolized it. (Figure 2a). This maneuver was designed to prevent retrograde flow into the pseudoaneurysm from the kidney.The aneurysm was excluded from the aorta by placing aortic covered stent grafts to ensure that there was no antegrade flow into the pseudoaneurysm. Completion images demonstrated exclusion of the pseduoaneurysm and preserved flow to the bilateral lower extremities (Figure 2b).The patient tolerated the procedure well. She was discharged home the next day. Follow-up CT scan at one month showed that the graft was in good position without any endoleaks; the bilateral iliac arteries were widely patent (Figure 3). 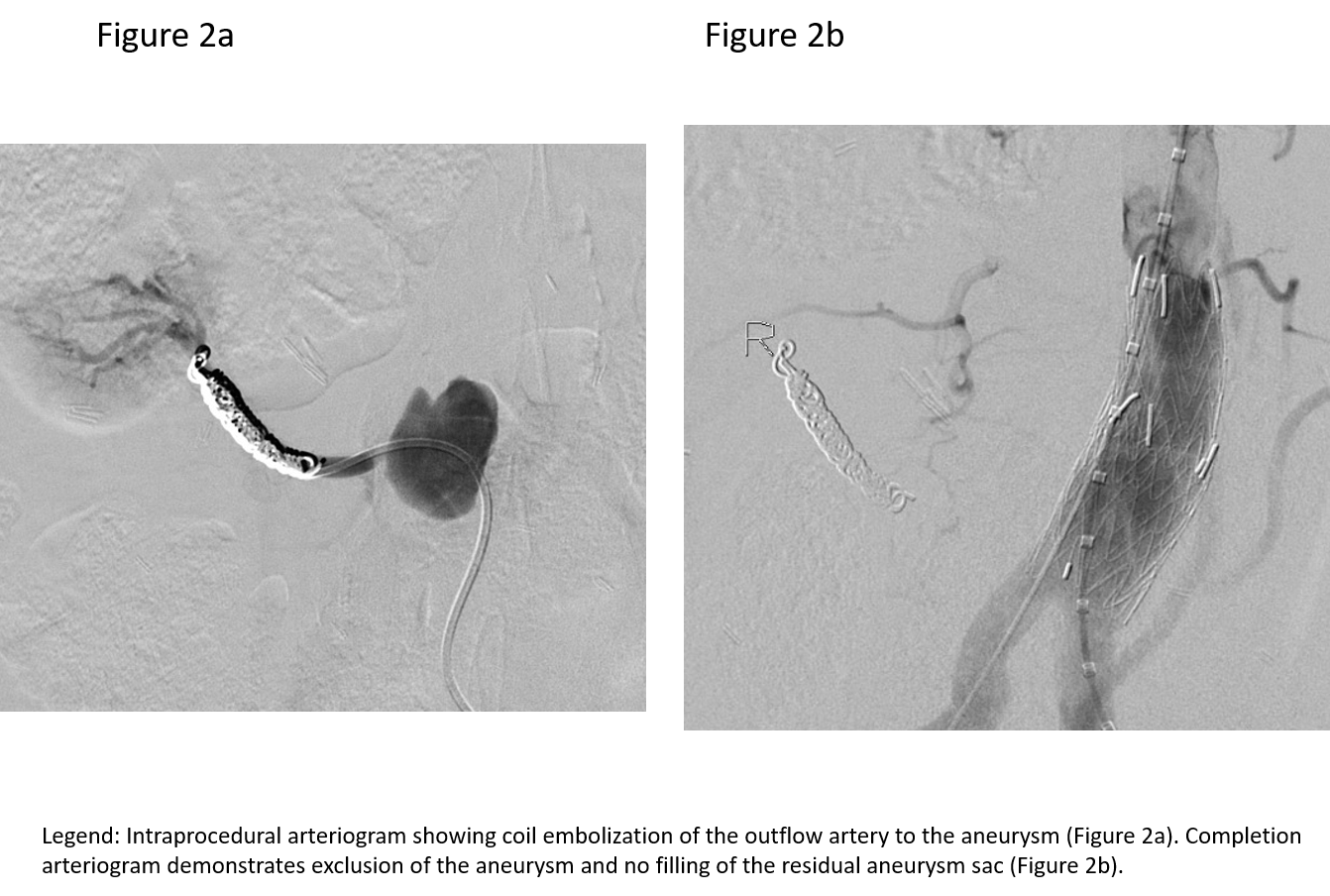 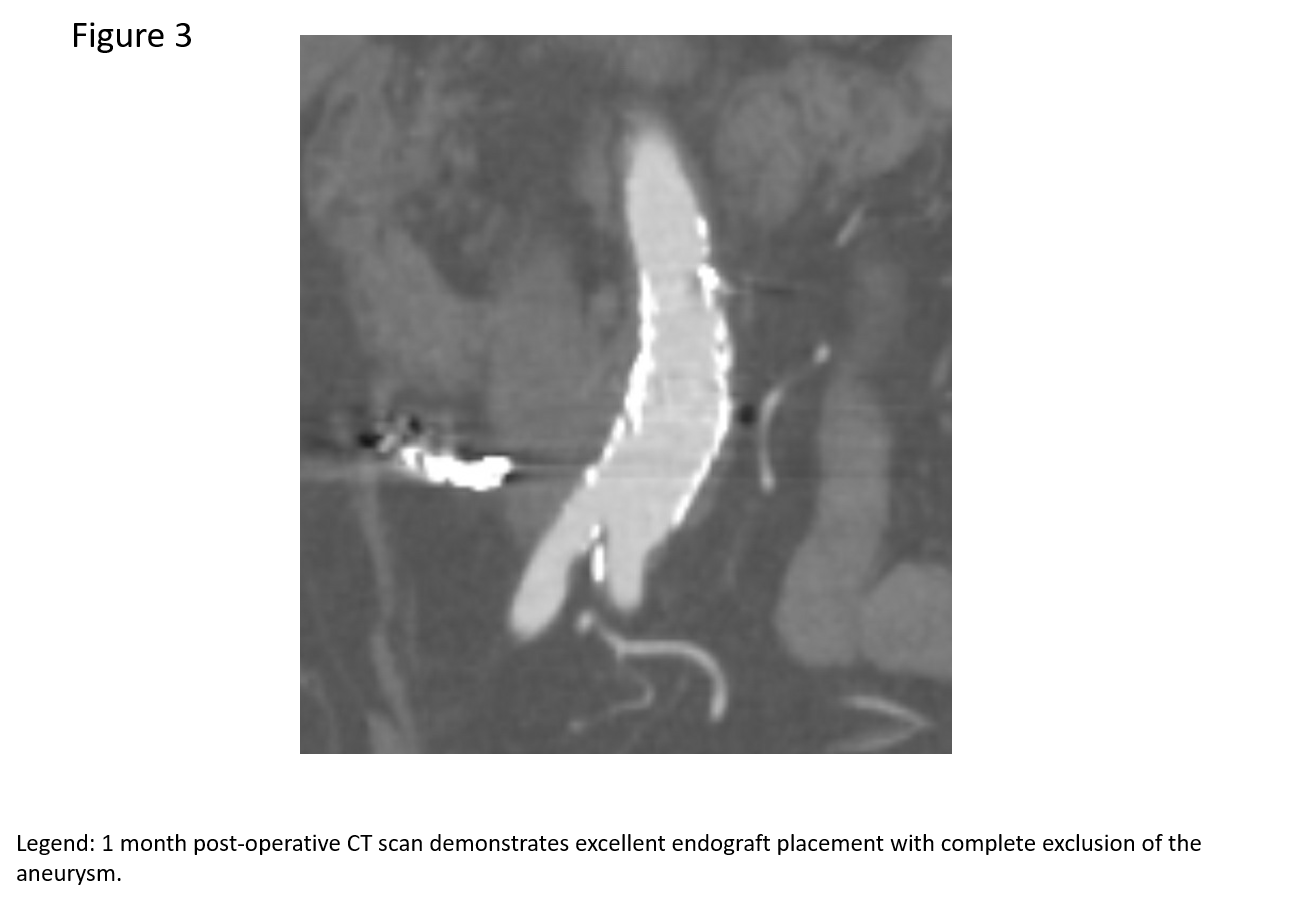 Aneurysmal disease affecting the abdominal aorta and its branches is frequently asymptomatic, but can lead to serious complications, including hemorrhage and death. The vast majority of AAA are fusiform, and there is general consensus that such aneurysms can be safely observed with serial imaging until they reach 5.5 cm in diameter. In our practice at UPMC, we use duplex ultrasound imaging, typically at six to 12-month intervals, which is non-invasive and does not expose the patient to CT scans that would require radiation and potentially nephrotoxic contrast agents. Once the patient’s aneurysm nears 5.5 cm in diameter, a CT scan is usually obtained in order to better size the aneurysm and determine if endovascular repair or open surgical repair would be most advantageousfor the patient.

The management of abdominal aorticpseudoaneurysms and visceral arterialaneurysms, as seen in this case, is less welldefined. Since these are relatively rare,there is less consensus around their natural history and management. As such, it is critical that patients undergo a clinical evaluation that includes a holistic view of the patient and related comorbidities. UPMC is a regional referral center forvascular surgery, and UPMC vascularsurgeons serve as local, national, andinternational leaders in the field. We haveextensive experience in treating complexaortic aneurysms and provide leadingendovascular and open surgical techniquesto our patients.