A 64-year-old female presents to the emergency department complaining of one week of cough and increasing dyspnea on exertion. Her symptoms had progressively worsened in 24 hours with associated scant hemoptysis and dull substernal chest pressure. She had a past medical history of a hypertension, hypothyroidism and deep vein thrombosis (DVT), and pulmonary embolism (PE) eight years ago, but had been off anticoagulation for the last six months. On presentation, her vital signs were: temperature 37°C, BP 109/56 mmHg, heart rate 108, respiratory rate 22, oxygen saturation of 92% on room air. Electrocardiogram (EKG) showed sinus tachycardia. Labs were remarkable for a troponin of 0.46 ng/mL (Normal < 0.1 ng/mL). A contrast-enhanced chest computed tomography angiography (CTA) was ordered (see Figure 1), which showed a saddle PE with extension into bilateral pulmonary arteries and an enlarged right ventricle (RV). She was started on a heparin infusion. The Pulmonary Embolism Response Team (PERT) was consulted, and the patient was transferred into the intensive care unit (ICU) for closer observation. 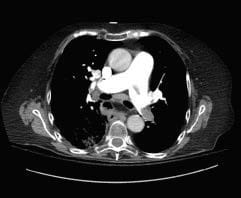 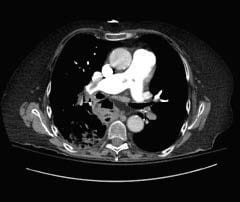 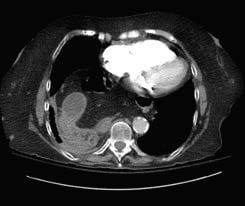 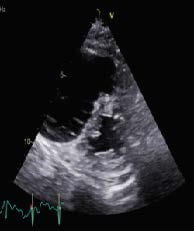 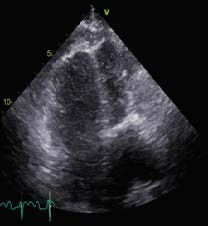