Jose-Alain Sahel, MD, is the recipient of the Breaking the Wall in Life Sciences 2021 Award: Restoring Vision for Retinal Degeneration award from Falling Walls. Dr. Sahel and his team were the first to develop a clinical trial that combines a biotherapy with special goggles to observe the first clinical evidence for vision restoration with optogenetics. His team also oversaw the clinical development of a wireless photovoltaic retinal prosthesis successfully used in trials as well as a gene therapy to treat Leber Hereditary Optic Neuropathy, a neurodegenerative disease that leads to blindness. The Phase III of the study for this new approach are completed in the United States and Europe with promising results.

The Falling Walls Foundation, a non-profit organization in Berlin, hosts an annual science summit that is a leading international, interdisciplinary and intersectoral forum for scientific breakthroughs between global science leaders and society. The awardees were selected among over a thousand projects from hundreds of international institutions. 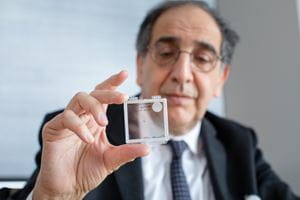 Dr. Sahel is one of the world’s top experts in retinal diseases and vision restoration research. In addition to his leadership roles at UPMC and the University of Pittsburgh, he is the founder of the Vision Institute in Paris and a professor at the Sorbonne’s medical school. He has developed several interventions — including stem cell implantation, gene therapy, innovative pharmacologic approaches, and the artificial retina — for retinitis pigmentosa, age-related macular degeneration, vascular eye disease and other vision impairments that currently are untreatable. Over the past decade, he has led pioneering efforts in optogenetic vision restoration, a technique in which cells in the retina are genetically modified to express light sensitive proteins. This therapeutic technique has the potential to help patients who are blind or visually impaired because of a genetic defect.

Dr. Sahel is a co-inventor on more than 40 families of patents, several of which have led to start-up companies including Fovea Pharmaceuticals., which Dr. Sahel founded and later became the Ophthalmologic Division of Sanofi Aventis. He also is a scientific co-founder of GenSight Biologics Inc., Pixium Vision Inc., and Sparing Vision Inc. He is a member of 11 editorial boards, including the Journal of Clinical Investigation and Science Translational Medicine.

Dr. Sahel studied medicine at Paris University and Louis Pasteur University, Strasbourg. He received his medical degree with a Medal of the Faculty of Paris and obtained his specialty certification in ophthalmology. He also was a research fellow and a visiting lecturer at the Massachusetts Eye and Ear Infirmary, Harvard Medical School, a visiting scholar in the Department of Molecular and Cellular Biology at Harvard University, and held the Cumberlege Chair of Biomedical Sciences at University College London.