Aortobifemoral bypass has long been considered the gold standard for severe aortoiliac disease (TASC II C and D lesions) and extraanatomic bypass (axillo-bifemoral) was reserved for higher risk patients who would not tolerate a laparotomy. While for simpler (TASC II A and B) lesions, endovascular intervention is well established. There are increasing reports of successful endovascular approaches for TASC II C and D aortoiliac occlusive disease (AIOD). Here we describe two challenging patients with severe AIOD.

An 80-year-old female was transferred to UPMC Presbyterian from an outside hospital with rest pain, tissue loss, and a mid-aortic and bilateral common iliac artery occlusion (Figure 1a). She had severe three-vessel coronary disease on recent cardiac catheterization. A hybrid procedure was performed via percutaneous, ultrasound-guided access of right common femoral artery and a left femoral exposure to perform an endarterectomy with profundaplasty given its severe atherosclerotic burden (Figure 1b). The chronic thrombotic occlusions of the iliac arteries and aorta were crossed bilaterally, pre-dilated, and stented. Bilateral balloon-expandable stents were deployed simultaneously in the mid-infrarenal aorta in a parallel kissing stent configuration (Figures 2 a-d), and covered self-expanding stents were utilized for the bilateral external iliac disease. She was discharged home with family a few days following the procedure with resolution of her rest pain.

A 63-year-old male was transferred to UPMC Presbyterian from an outside facility with critical limb ischemia and infected axillo-bifemoral bypass with thrombosed fem-fem segment (Figure 3a). The extra-anatomic bypass, which was performed one-year prior for aortic occlusion and rest pain, was chosen as he has a hostile abdomen with multiple operations related to his bladder surgery and radiation.

He had complete resolution of rest pain and was ambulatory. He will be maintained on life-long oral antibiotic suppressive therapy.

The guidelines by the Trans-Atlantic Inter-Society Consensus regarding the management of AIOD were published in 2007. The guidelines state that open revascularization is favored over endovascular therapy for TASC II D AIOD. The guideline originated from practice patterns, technical considerations, the lower morbidity of endovascular therapies, and the consensus of experts in the field. There was a paucity of data comparing open versus endovascular strategies head-to-head at the time. Over the last 10 years, the endovascular experience and advancement of technology have shifted the treatment paradigm to “endovascular first” strategy for previous arterial lesions in which open surgery in the past was the only consideration.

Long-term patency of aortoiliac stenting is influenced by distal outflow runoff, the characteristics of the stent, and the anatomic configuration of the iliac stents. Hybrid treatments that include femoral bifurcation open intervention, similar to the cases described, are critical for the durability of aortoiliac stenting. Maurizio et al. reported on 50 patients with TASC II C and D AIOD with a hybrid treatment in 12 of the patients with multi-level disease. The hybrid group’s primary patency was 91.7 percent at one and two years and 80.2 percent at three years with 100 percent secondary patency at one, two, and three years [10].

Exact choice of stent is somewhat controversial. In our opinion, covered balloon-expandable stents in TASC II D AIOD are favorable. In a multicenter, prospective, randomized control trial, Mwipatayi et al. (COBEST trial) demonstrated superior patency results at 12- and 18-months for covered stents as compared to bare-metal stents for TASC II C and D AIOD lesions. The difference in patency results were not observed in TASC II B lesions. By excluding the underlying plaque, covered stents are potentially able to limit late lumen loss seen with bare-metal stents from ongoing inflammation and smooth muscle cell proliferation through the open stent struts. There are two different configurations that are typically used in these cases and are being studied as a factor associated with improved patency for endovascular therapy of extensive AIOD (Figure 4a and 4b). Currently, we deploy the stents simultaneously in a parallel kissing configuration. 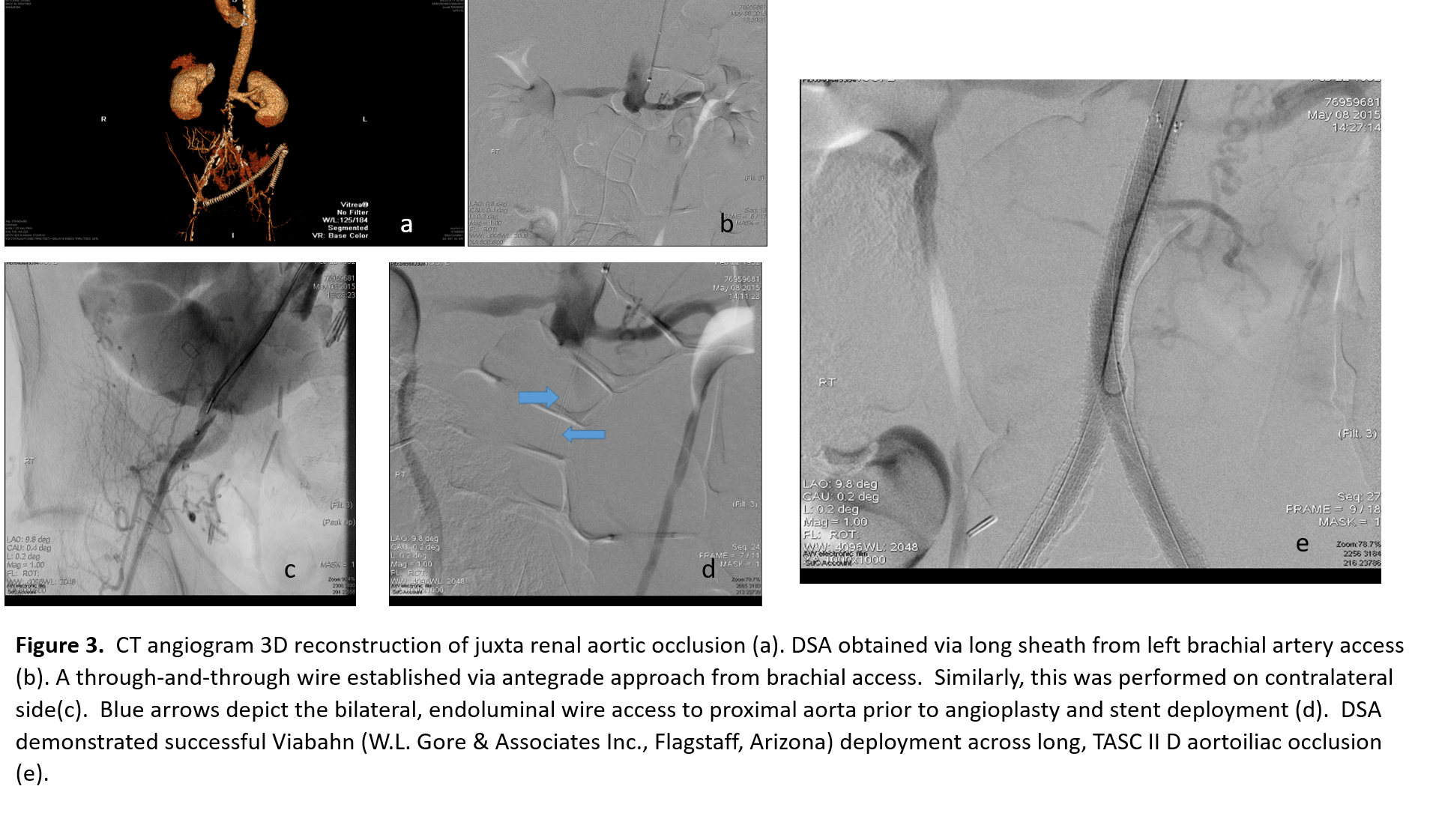 In 2013, a new technique using three covered balloon-expandable stents to reconstruct the aortic bifurcation (CERAB– Covered Endovascular Reconstruction of Aortic Bifurcation) was described by Goverde et al. The theoretical advantage of the CERAB technique is lower radial and volume mismatch which provides improved local flow profiles and stent patency. Long-term patency results of the CERAB technique are still to be determined. The kissing stent configuration has improved cost effectiveness by eliminating the need for the large, aortic endograft. The CERAB technique has the disadvantage during aortic deployment of contralateral wire sacrifice and coverage of aortic collateral circulation. Endovascular and hybrid procedures for TASC II C and D AIOD provides patients with a durable result and low risk of surgical complication. The addition of a hybrid procedure improves distal outflow without additional morbidity. The low surgical morbidity, excellent primary and secondary patency rates, and reduced hospital length of stay make it a viable alternative to ABF bypass for TASC II C and D AIOD. 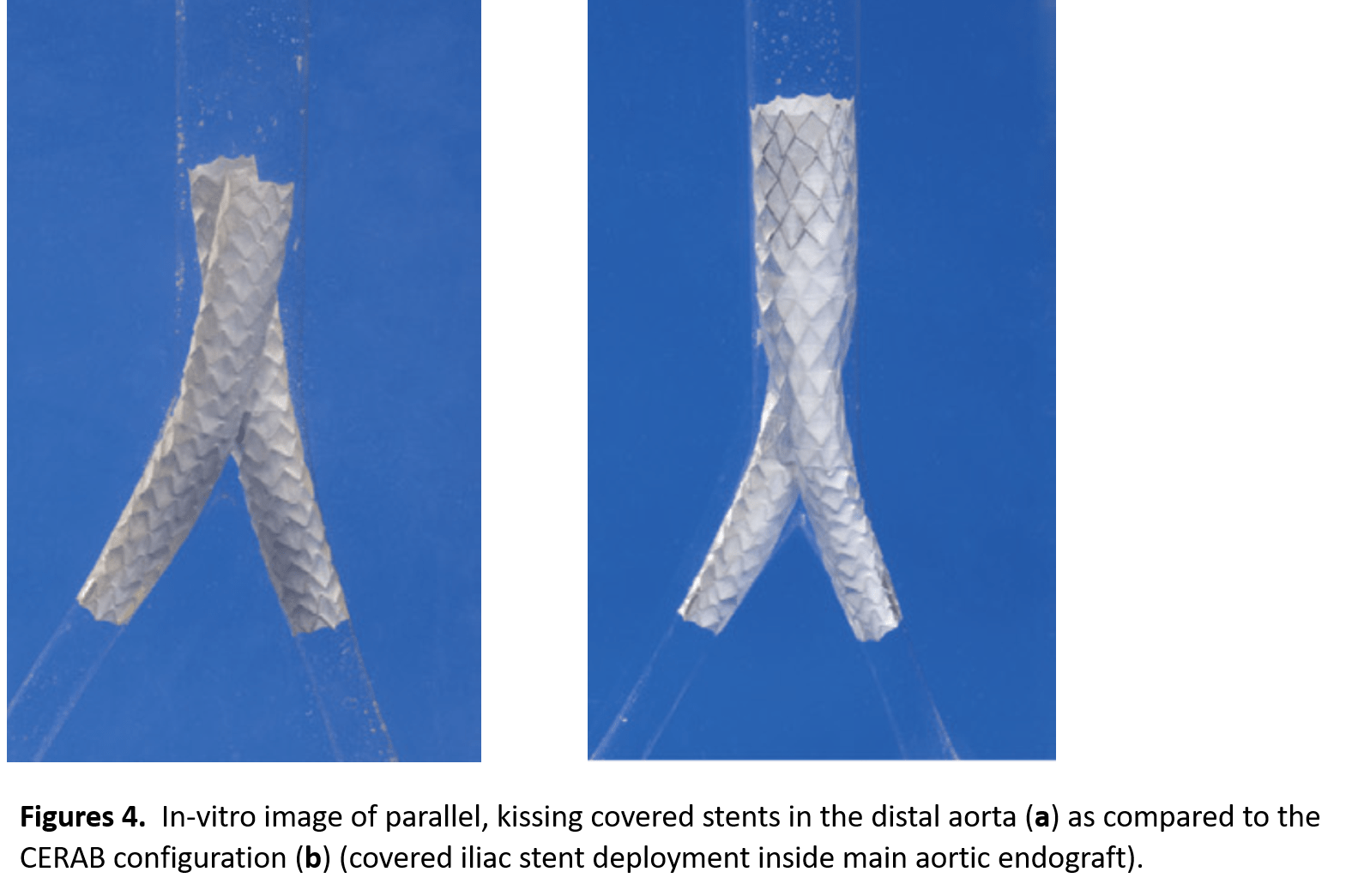