Reaching the Apex: A New Surgical Approach to the Petrous Apex

The UPMC Departments of Otolaryngology and Neurological Surgery have been pioneering developers and proponents of the endoscopic endonasal approach (EEA) to skull base surgery for more than 30 years. In that time, the faculty and the skull base surgery program have become internationally sought for their surgical skills, research, and educational programs designed to teach aspects of EEA to new generations of surgeons around the world.

Carl Snyderman, MD, MBA, a professor in the Department of Otolaryngology, with a secondary appointment as professor in the Department of Neurological Surgery, has been with UPMC and the University of Pittsburgh since completing his residency in Otolaryngology in 1987. Dr. Snyderman and Paul Gardner, MD, Peter Jannetta Professor of Neurological Surgery, are co-directors of the UPMC Center for Skull Base Surgery, the first of its kind in North America. Dr. Snyderman was the first fellow to complete the cranial base surgery fellowship at UPMC in 1989. Since then, he has been at the forefront of cranial base surgery, exploring new applications of the endoscopic endonasal approach and driving advances in research and education. Dr. Snyderman is a past president (2015) of the North American Skull Base Society (NASBS) and is a current member of its board of advisors. 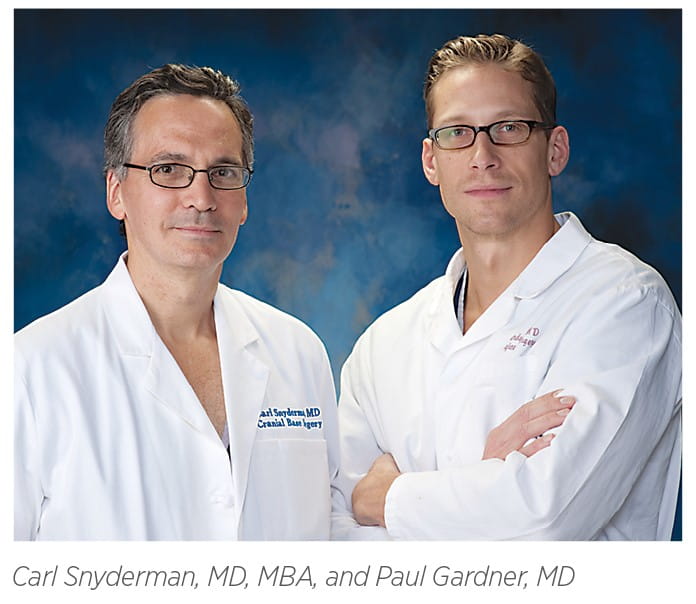 The last several years have seen the advent of new technological advances, new surgical procedures, and new training programs from Dr. Snyderman and his colleagues, continuing the mission and expanding the legacy of Pittsburgh as a pioneer and leader in skull base surgery across the world.

Published in the Journal of Neurosurgery in October 2018, Dr. Snyderman and colleagues outlined a new surgical technique they have developed called the contralateral transmaxillary (CTM) approach.

The CTM approach allows surgeons to access the difficult-to-reach region of the petrous apex (PA) with an improved angle of approach of approximately 25 degrees, versus what would typically be required through an endoscopic endonasal approach.

“This region of the skull base is a very challenging area to access; removing large tumors from it with other techniques is difficult and dangerous because of the vasculature and nerves. CTM allows us to access this region by coming at it from the opposite side via the sinuses. This approach allows us to work behind the internal carotid artery (ICA) (generally the paraclival segment of the ICA), greatly diminishing the risk of iatrogenic injury inherent with operating in that area,” says Dr. Snyderman.

Their initial study and characterization of the technique, performed on a cadaveric model, compared the CTM approach against the standard EEA for accessing this region.

Clinical experience suggests that there may be a reduction in risk and morbidity with the approach because of the improved lateral trajectory of access to the petrous apex and avoidance of the paraclival segment of the internal carotid artery.

The first group of researchers to describe this procedure and publish on it in a medical journal, Dr. Snyderman and colleagues have since performed more than 25 surgeries using the CTM approach to treat a variety of conditions: chordoma, chondrosarcoma, meningioma, schwannoma, petrous apicitis, and metastasis. This experience represents the world’s largest series of patients at present treated with the CTM approach.

During these first procedures, the CTM approach has been shown to greatly expand endonasal access to the PA with limited morbidity and without compromising nasoseptal flap reconstruction. Access was improved for lesions with posterolateral PA extension, allowing access as inferior as the jugular bulb and first genu of the ICA and as superior as the internal auditory canal. The ability to achieve gross total resection for chondroid neoplasms of the clivus and PA is greatly improved with the CTM approach.

“In developing the approach, I had the idea that what we needed was a better trajectory and improved angle of approach. Theorizing that if we opened up the cheek sinus, an already well-established historical technique, by making an incision inside the mouth through the front wall of the maxillary sinus, it would provide a nice corridor and alignment with the position of the ICA. Instead of moving the artery out of the way, which is very high risk, now we have a direct path to the recesses of the petrous apex and can follow the tumor for complete resection. Developing the CTM was really about rediscovering an old approach but applying it in a new way to access this area of the skull base,” says Dr. Snyderman. 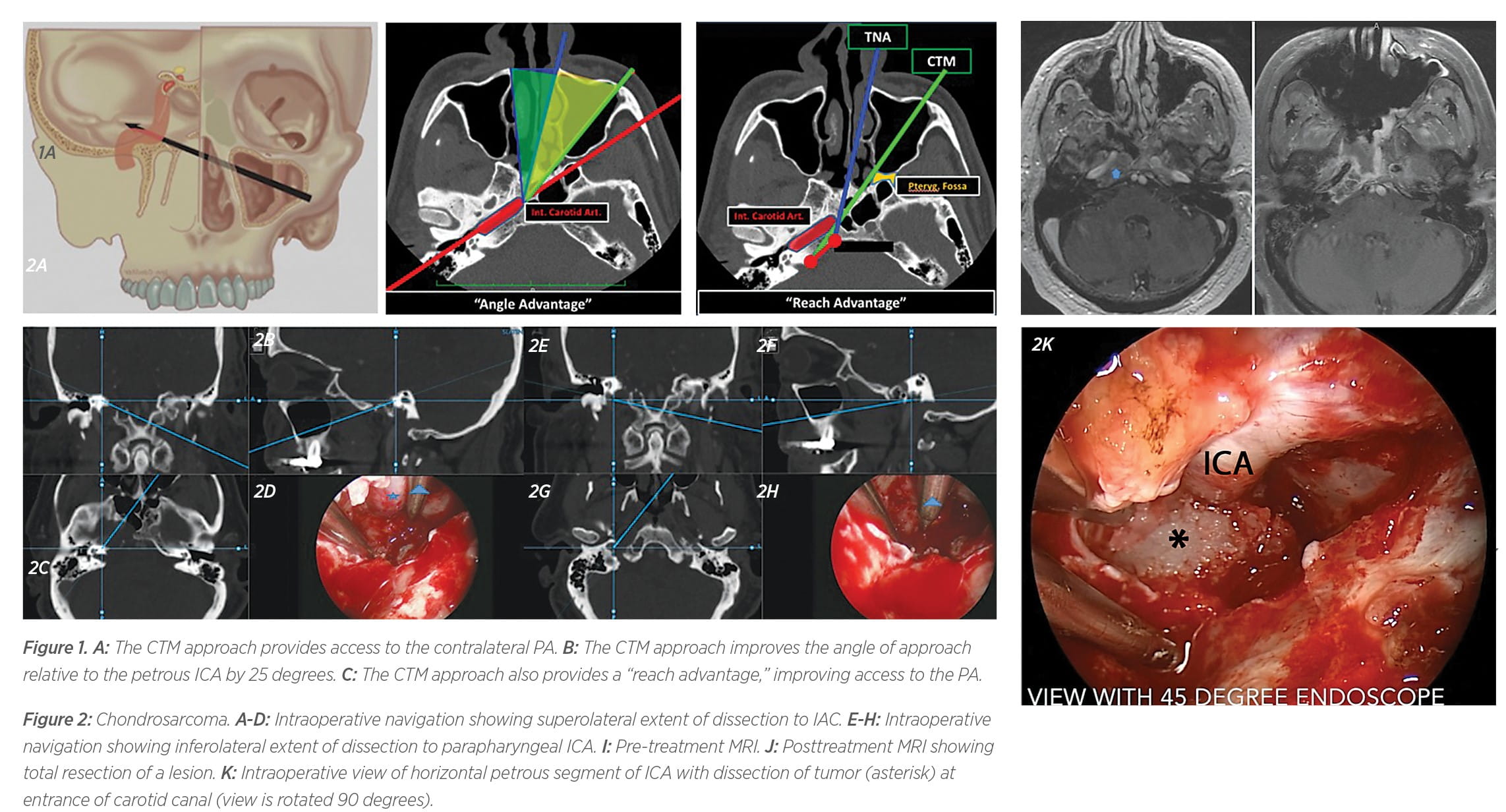