When a critically ill neonate in our community is in need of the specialty care at UPMC Children’s Hospital of Pittsburgh, the Transport Program is called with hopes of a speedy response and arrival of the team. UPMC Children’s Transport Program performs approximately 1,400 transports a year, with 50 to 60 percent being neonatal patients. The referral base for neonates is about a 150-mile radius for ground and helicopter transports, although the team is also capable of international transports via fixed wing aircraft.

Melissa Riley, MD, is a neonatologist and the medical director of neonatal transport since 2011. “The American Academy of Pediatrics set the standard for neonatal/pediatric transport team response time at less than 20 minutes. Analysis of our response rates revealed room for improvement; the team was meeting the 20-minute AAP only goal 59 percent of the time. We started to examine where the issues may be, and where and how we could improve upon them. Getting the team to a patient quickly not only provides them with the world class care they require but also relieves the community hospital of the stress of caring for a critically ill neonate,” says Dr. Riley.

The transport units consist of specially trained RNs, RTs, and intensive care physicians, with two to three teams available 24 hours a day, seven days a week. Originally, the teams were located at UPMC Children’s while the vehicles — ambulance and helicopters — were stationed strategically in the surrounding areas. The process was examined to see where crucial time could be gained and whether there were inefficiencies to be eliminated: time spent on a call, time for a vehicle to travel to the destination, time involved with loading equipment and necessary supplies.

The first improvement involved education for the MedCall dispatchers in knowing that intubated neonates or those coming from a birthing center with the need to be in an incubator would automatically require a neonatal transport team. “The dispatchers can now efficiently arrange for a vehicle to be en route before the call is even finished.” 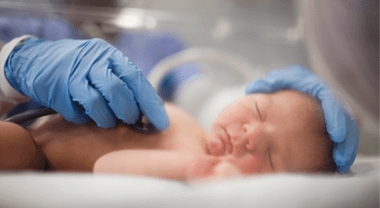 While small, incremental gains were wrought from this change in procedure, Dr. Riley explains that the bigger hurdle was how to reduce the transit time for the vehicle to get to the UPMC Children’s team given their separate locations. Logistical challenges and cost barriers were scrutinized while evaluating the option of stationing a helicopter at UPMC Children’s but the better solution turned out to be moving one of the teams to the helicopter.

“A helicopter and flight crew is stationed at the Allegheny County Airport which happened to have space for one of the UPMC Children’s teams. Minor renovations and IT infrastructure were proposed, approved, and made to the base site in October 2014 to accommodate the UPMC Children’s team and the specialty neonatal/pediatric equipment. We observed a positive increase in our compliance rates with this major change,” says Dr. Riley.

Striving for perfection, two dedicated ambulance units were incorporated into the program in July 2017: one housed at UPMC Children’s and the second at the Allegheny County base, placing both ambulances in proximity to the teams. This led to a further upward trend in response time compliance.

Community satisfaction is another metric to measure program success and the improved response times has led to a decrease in lost transports (transports by other institutions) and allowed an ability to focus on the needs of our community facilities. “Our transport teams bring the ICU to our referral centers and they can offer outreach and educational initiatives such as procedural skill training and case reviews that are tailored to the needs of each center,” says Dr. Riley. “We are continuously working to test and implement new procedures and operational transport protocols to improve the response times for our transport team.”