Disc Structure and Function in the Spine
Vertebrates are endowed with the spinal column, allowing for greater body structural support and movements. Residing within the spinal column are the intervertebral discs (IVDs), which are fibrocartilaginous joints that provide support and flexibility to the otherwise rigid vertebral column. IVDs have evolved to withstand continuous compressive pressure, and the torsional and shearing stresses of normal living activities. For instance, each lumbar disc can withstand roughly 200 lbs. of compression (standing) and ~500 lbs. (running) of compression in an average person. IVDs of an individual over 50 years of age would have endured continual mechanical loading for over 300,000 hours, sleeping time excluded. Tough, but unfortunately not indestructible, disc tissue does undergo degeneration, which can lead to pain and functional loss. A major public health concern with long-term socioeconomic consequences, back pain in the United States alone is responsible for an estimated 149 million lost work days and an overall economic loss of about $100 billion each year.

Aging Is a Cause of IDD
Several major risk factors of intervertebral disc degeneration (IDD) have been identified that are analogous to factors contributing to the failure of mechanically loaded structures, such as bridges. A bridge can lose its structure and function through poor construction quality, wear and tear over time, exposure to sudden excessive loads, or environmental assaults (Figure 1).

Likewise, IDD can occur due to faulty genetics (analogous to the poor construction quality of a bridge), aging, mechanical trauma, or other environmental contributors, such as tobacco smoking and radiation. Although the etiology of IDD is complex and multifactorial, aging is by and large a major risk factor, as the incidence of IDD markedly increases with age. Elucidating the biology of disc aging is imperative to develop effective interventions for age-associated IDD, because the world population over the age of 60 is projected to grow to a staggering 2 billion people by 2050.

Aging of biological structures results from time-dependent accumulation of stochastic damage to cells, organelles, and macromolecules such as proteins and DNA, leading to cell death and senescence. The consequence of aging is an inevitable loss of the ability of tissue to respond to stress and maintain homeostasis. Aging of IVD invariably is accompanied by loss of disc matrix proteoglycan and water, leading to the formation of tissue fibrosis and fissures, and eventual loss of disc structural integrity and function. How does damage to cells lead to these degenerative changes?

Loss of disc matrix is due to reduced matrix synthesis and/or enhanced matrix break.down. These are cell-driven processes since disc matrix degradation is predominantly a consequence of proteolytic action of catabolic enzymes produced by cells. This begs the question of how cells in aging discs accumulate damage that somehow leads to the loss of their ability to maintain matrix balance.

The Role of Cellular Senescence in Age-associated IDD
The Ferguson Laboratory for Orthopaedic and Spine Research is testing the hypothesis that age-dependent accumulation of damage in disc cells transforms them into senescent cells, which then wreak havoc on disc tissue. Studies of other cell types show that cells become senescent upon the accumulation of a sufficient level of unrepaired DNA damage. The cells then stop dividing and take on a rather sinister personality, known as the senescence-associated secretory phenotype (SASP), whereby they chronically produce and secrete high amounts of numerous pro-inflammatory cytokines and matrix proteinases. Because senescent cells accumulate in various tissues and organs with aging, the persistent inflammation associated with SASP is presently believed to disrupt tissue structure and function and promote aging. This theory is supported by studies demonstrating that clearance of senescent cells delays aging-associated disorders.

The culmination of research using rodent models of natural and accelerated aging over the last five years in the Ferguson Laboratory all pointed to a strong link between disc cellular senescence and age-associated IDD. For instance, we demonstrated progressive disc aging in a murine model (Ercc1Ð/D mice created by our collaborator Laura Niedernhofer, MD, PhD) of a human progeroid syndrome caused by deficiency of the DNA repair endonuclease, ERCC1ÐXPF. Ercc1Ð/D mice exhibit rapid age-related IDD, including premature loss of disc proteoglycan (PG) matrix, reduced synthesis, and enhanced degradation of disc matrix. 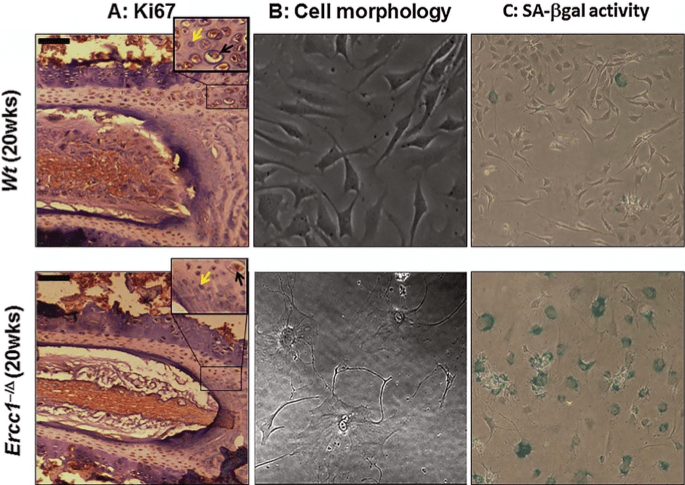 We further demonstrated a strong link between cellular senescence and age-related IDD in natural aging mice, as well as in mice exposed to genotoxic stress (stress that causes damage to DNA) such as tobacco smoking, whole body irradiation, and the chemotherapeuticagent mechlorethamine. We also directly examined the phenotype of senescent human disc cells in culture; they exhibit growth arrest, SASP, and perturbed matrix homeostasis, (as evidenced by their decreased capacity to synthesize new matrix), and enhanced matrix degradation. Our in vitro and in vivo research suggest that disc cellular senescence is an important driver of PG matrix homeostatic perturbation and PG loss. A growing body of research from our lab and other labs continues to uncover the important role of cellular senescence in disc aging and degeneration in both humans and animal models.

Therapeutic Interventions
Another major objective of the Ferguson Laboratory is to explore therapeutic biologics to delay age-related IDD, with a focus on targeting key molecular modulators of cellular senescence. To this end, we initially targeted oxidative damage, as it is a well-established driver of cellular senescence and aging. In collaboration with Peter Wipf, PhD, from the University of Pittsburgh Department of Chemistry, we found that disc cell and disc organotypic cultures grown in high oxygen (20 percent O2) exhibit oxidative stress that can be alleviated by treatment with the mitochondria-targeted reactive oxygen species (ROS) scavenger XJB-5-131 Importantly, we demonstrated that treatment of accelerated aging Ercc1Ð/D mice with XJB-5-131 resulted in improved disc total glycosaminoglycan content and proteoglycan synthesis. We also targeted NF-kB signaling, a central mediator of SASP and cell response to stress. Using both pharmacological and genetic strategies to inhibit NF-kB signaling, together with our collaborators Paul D. Robbins, PhD, and Dr. Niedernhofer, we discovered that inhibition of NF-kB activity ameliorates age-associated IDD in accelerated aging Ercc1Ð/D mice (Figure 3). 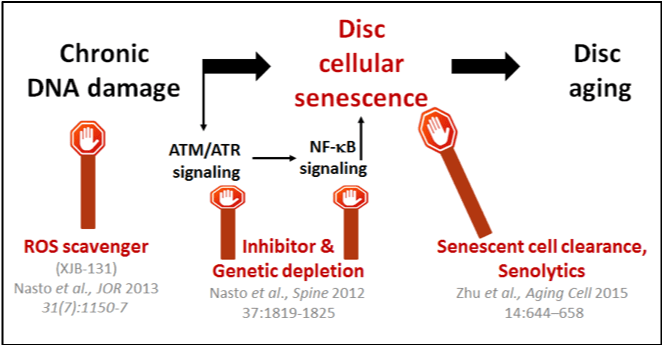 Our research of the aging spine comes at an opportune and exciting time, as the University of Pittsburgh and UPMC have recently launched large initiatives to accomplish their collective vision to create the world-class center for integrated aging research in Pittsburgh. Enormous resources for basic, clinical, and translational research related to aging have been apportioned, as evidenced by the recent recruitment of the world-renowned aging researcher Toren Finkel, MD, PhD, to head the Aging Institute of UPMC Senior Services and the University of Pittsburgh. These productive and successful initiatives came about in part because of the three-year-long efforts of Nam Vo, PhD, and his colleagues Fabrisia Ambrosio, PhD, MPT, and Ben Van Houten, PhD, who created the Stimulating Pittsburgh Research in Geroscience (SPRIG) Work Group to fuel fundamental discovery in the basic biology of aging research to bridge translational science and promote healthy aging. Presently, Dr. Vo continues to be involved in the establishment of some of these aging research initiatives with the enthusiastic support of Steven Shapiro, MD, and Dr. Finkel, and he continues to create bridges and resource opportunities for those working on age-related orthopaedic research projects in the UPMC Department of Orthopaedic Surgery.

The Ferguson Laboratory for Orthopaedic and Spine Research program is multidisciplinary in nature. Under the leadership of its medical director, Joon Lee, MD, and co-directors Nam Vo, PhD, and Gwendolyn Sowa, MD, PhD, the Ferguson Laboratory research program encompasses several distinct but complementary areas of interest. The biology of disc degeneration, mechanobiology, and biomechanics are all directed toward the lab's mission of understanding the basic science behind disc degeneration and developing therapeutic treatment strategies. Kevin Bell, PhD, another primary investigator in the lab, directs the biomechanics research using a robot-based spine in vitro testing system, as well as a virtual reality-controlled cervical kinematics system for in vivo studies. The Ferguson Laboratory research program also has spurred a large and growing number of productive collaborations within the Department Orthopaedic Surgery and beyond. In a fertile UPMC research environment, the Ferguson Laboratory team is poised to tackle the challenges of spine research. None of these exciting research endeavors would be possible without the Ferguson Laboratory's team of dedicated and talented technicians, students, residents, postdoctoral fellows, administrators, and the unwavering support from the Department of Orthopaedic Surgery and its chairman, Freddie H. Fu, MD.