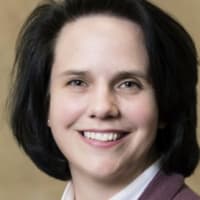 Elizabeth R. Skidmore is an occupational therapist with expertise in neurological rehabilitation. In addition to her primary appointment in the Department of Occupational Therapy, she holds secondary appointments in the School of Medicine Department of Physical Medicine & Rehabilitation, the School of Nursing, and the Clinical Science Translational Institute. Skidmore is a scientist at the University of Pittsburgh Medical Center Rehabilitation Institute.