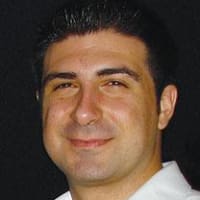 Georgios A. Zenonos, MD, joined the Department of Neurological Surgery in July of 2011.

Georgios A. Zenonos, MD, joined the Department of Neurological Surgery in July of 2011.

He was born and raised in the Mediterranean island of Cyprus. After high school, Dr. Zenonos served a 26-month military service as a military officer before matriculating in the University of Athens Medical School in Greece with a full scholarship from the Ministry of Education. Graduating as the valedictorian of his medical school class, he received the Alexander S. Onassis Distinguished Scholar Award, and then joined the Neuroapoptosis Laboratory at the Brigham and Women’s Hospital, Harvard Medical School, where he went on to study the molecular mechanisms of programmed cell death in the nervous system.

During his fifth and sixth years of residency here at the University of Pittsburgh, Dr. Zenonos will be a skull base neurosurgery fellow working with Paul A. Gardner, MD, and Juan C. Fernandez-Miranda, MD.

Dr. Zenonos' publications can be reviewed through the National Library of Medicine's publication database.