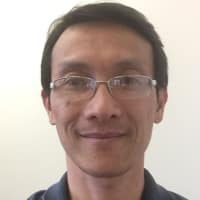 Nam Vo received his PhD degree with Dr. Michael Chamberlin in Biochemistry from the University of California, Berkeley, in 1998 and completed his post-doctoral training with Dr. Michael Lai at the University of Southern California in 2003. His doctorate research involved detailed molecular analyses of the early stages of E. coli transcription. He continued his training by studying the mechanism and regulation of hepatitis C virus RNA replication, initially as a postdoctoral fellow and subsequently as an assistant specialist in Dr. Caroline Kane at the University of California at Berkeley. Dr. Vo also taught Introductory Microbiology at Contra Costa College in 2005–06. Dr. Vo joined the Department of Orthopaedic Surgery of UPMC as a research assistant professor in 2006.

In addition, he is active in teaching medical students, medical residents, post-doctoral fellows, having trained over 50 trainees on research projects, 22 of whom have won awards for their work, including the prestigious Outstanding Paper Award at the International Society for the Study of the Lumbar Spine Annual Meeting in 2008. He was named the University of Pittsburgh Department of Physical Medicine and Rehabilitation Teacher of the Year Award in 2007 and was named the Young Academician of the Year by the Association of Academic Physiatrists in 2009. He is also actively involved in training future clinician scientists as an Assistant Dean for Medical Student Research.

Dr. Vo has been actively engaged in teaching and mentoring students and postdoctoral fellows. He has served as a research advisor for over 50 trainees, many of whom have garnered noteworthy research awards and fellowships while under his mentorship. He also regularly lectures in graduate courses at the University of Pittsburgh School of Public Health and School of Medicine. These include the Pathophysiology of Environmental Disease (EOH 3210) in the Department of Environmental and Occupational Health and the Extracellular Matrix in Tissue Biology and Bioengineering (MSCMP 3735) in the Departments of Pathology. In addition, Dr.Vo has been serving as a facilitator in Evidence-Based Medicine Applied and in Investigation and Discovery, the first year medical school courses in the Scientific Reasoning in Medicine Block.