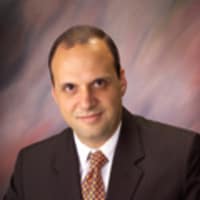 Samir Saba (BE 1989, MD 1993) received his Bachelors degree in Electrical Engineering in 1985 from the American University of Beirut and his Medical degree in 1993 from the same institution. He then finished his training in Internal Medicine (1993-1996), in Cardiolovascular Diseases (1996-1999), and in Cardiac Electrophysiology (1999-2000) all at the Tufts University – New England Medical Center in Boston, Massachusetts, prior to joining the faculty of the University of Pittsburgh Medical Center as an Assistant Professor of Medicine in the field of Cardiac Electrophysiology.

Starting in 2005, Dr. Saba was appointed chief of the Cardiac Electrophysiology section and director of the cardiac electrophysiology laboratories at the University of Pittsburgh medical Center. He was promoted to Associate Professor of Medicine and of Clinical and Translational Science in 2009. He was granted tenure by the University of Pittsburgh in August 2014. He is currently a fellow of the American College of Cardiology and of the Heart Rhythm Society.

Dr. Saba’s clinical interest and expertise have focused on the management of arrhythmias and conduction abnormalities of the heart. He has wide experience in implanting and managing all cardiac implantable electronic devices (CIED), including pacemakers, defibrillators, and cardiac resynchronization therapy devices. He also has expertise in ablation procedures of ventricular and supraventricular arrhythmias including atrial fibrillation and ischemic ventricular tachycardia. In addition, Dr. Saba is nationally recognized for his expertise in CIED lead management, including lead extractions.

On the research front, Dr. Saba has served as principal investigator on more than 20 clinical research protocol involving human subjects. He also lead the STARTER randomized controlled trial which examined the role of Speckle tracking echocardiography-guided left ventricular lead placement on mortality and other outcomes in cardiac resynchronization therapy patients. Dr. Saba currently serves as the international principal investigator on the LONGEVITY trial which examines the battery longevity of current generation defibrillators.

Dr. Saba has authored more than 160 manuscripts that were published in peer-reviewed journals and has been issued 3 patents for inventions in the field of cardiac electrophysiology. Dr. Saba is the recipient of research grants from the National Institutes of Health, the American Heart Association, the American Heart Foundation, and the American College of Cardiology. His research interests include: