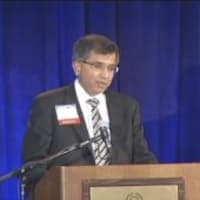 Dr. Nimgaonkar currently heads the Cross-National Program in Genetic Epidemiology of Psychotic Disorders, which researches the genetics of psychotic illnesses such as schizophrenia, bipolar disorder and related illnesses.

With funds from the National Institutes of Health, Dr. Nimgaonkar oversees several international research projects involving the recruitment of families with one of more ill persons, including large-scale studies in the United States, India and Canada. He also is working to expand collaborations established with investigators in Egypt and South Korea.

A member of the Royal College of Psychiatrists and a diplomate of the American Board of Psychiatry & Neurology, Dr. Nimgaonkar is the recipient of several honors, including a Rhodes scholarship, the National Institute of Mental Health Scientists Development Award for Clinicians (1992-1997) and the Independent Scientist Award (1998-2003).