Adoptive cell transfer of tumor-infiltrating lymphocytes is a complex, personalized therapy with the potential to generate an immune response against a variety of tumor types. In clinical trials, cutaneous and uveal melanomas responded to this innovative approach, and new trials have been initiated at UPMC to study the utility of adoptive cell transfer of tumor-reactive T cells in other common and uncommon cancers. 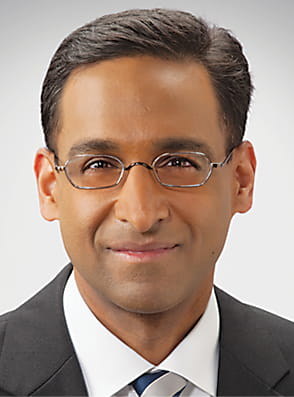 Udai Kammula, MD, the director of the Solid Tumor Cell Therapy program at UPMC Hillman Cancer Center, believes that adoptive cell transfer (ACT) has several potential advantages over other immunotherapeutic approaches to treat cancer. Dr. Kammula and his team can select tumor-infiltrating lymphocytes (TILs) with significant personalized antitumor reactivity, activate the cells, and grow them to large numbers. Thus, tumor-fighting T cell populations can be directly instilled into the patient without the need for other immune-boosting agents, which may be poorly effective or cause toxicity.

Immunotherapy using ACT was pioneered in patients with cutaneous melanoma, a very immunogenic cancer, and 30 years of research findings support ACT as a feasible approach to kick-start the immune system to fight cancer. The multistep process starts when the patient undergoes metastasectomy to procure tumor tissue. Next, autologous TILs are liberated from the resected tumor metastasis and undergo large-scale ex vivo expansion. The best ways to select cells for expansion is an active area of investigation. The patient then receives lymphodepleting chemotherapy followed by intravenous infusion of the expanded lymphocytes and treatment with interleukin-2 to promote T cell survival. The patient’s tumor response is then monitored.1 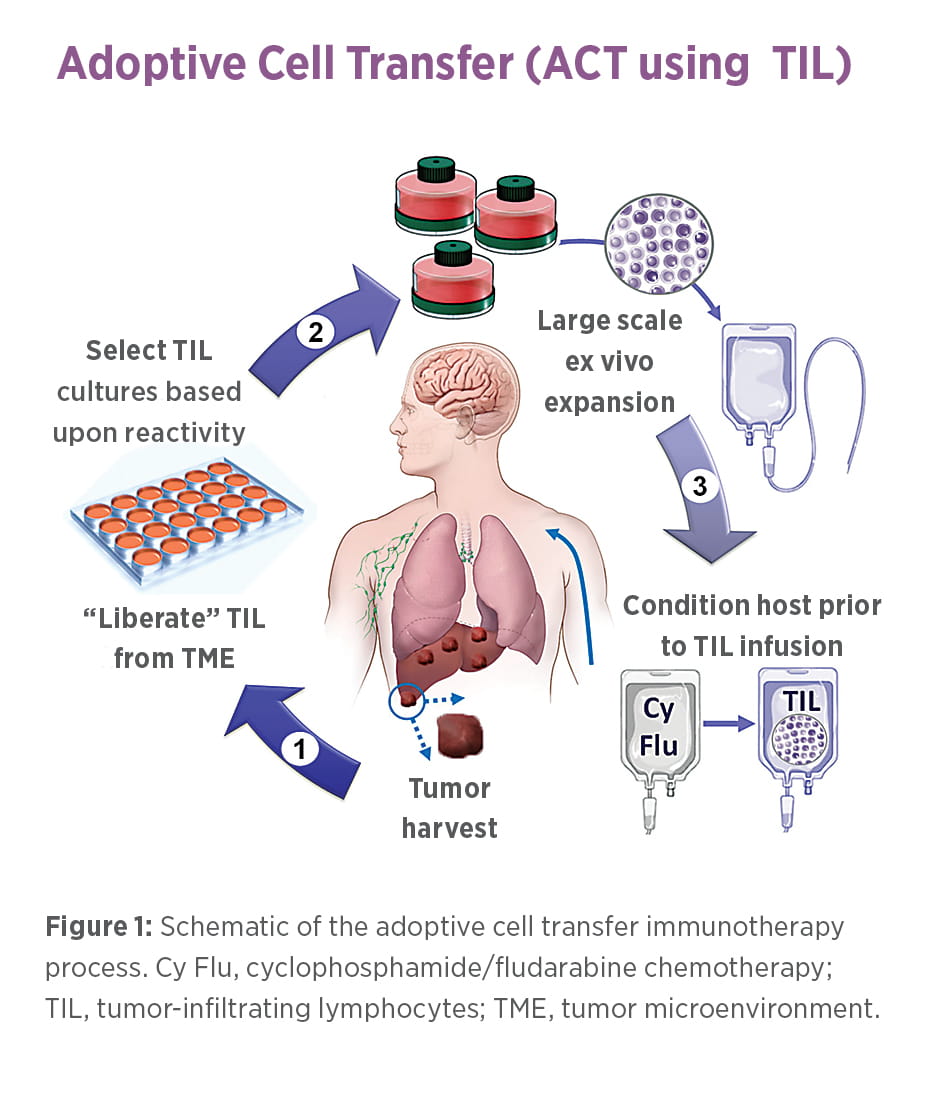 After ACT was established as a feasible therapy for cutaneous melanoma, Dr. Kammula and his colleagues at the National Institutes of Health (NIH) wanted to demonstrate proof of principle in another cancer.1,2 They chose to examine uveal melanoma, a rare cancer that did not respond to any known immunotherapies. In work published in 2016 in Clinical Cancer Research and 2017 in Lancet Oncology, they demonstrated that tumor-reactive TILs could be isolated from metastatic uveal melanoma and that a subset of patients with uveal melanoma responded to ACT immunotherapy with selected TILs.3,4 This trial was critically important in establishing ACT as a potentially useful immunotherapeutic approach because even a cancer that had not responded to any other immunotherapies could respond to ACT.

When Dr. Kammula came to UPMC from the NIH in 2017, he began a Phase II trial to further improve ACT for patients with metastatic uveal melanoma (NCT03467516). This trial, which is funded by the UPMC Immune Transplant and Therapy Center, is currently ongoing. One goal of the trial is to confirm Dr. Kammula’s initial observations. Other goals are to identify biomarkers that may predict therapeutic response and to isolate the genes responsible for TIL recognition of uveal tumors. Additionally, the trial allowed Dr. Kammula to set up the production facility and clinical infrastructure at UPMC needed for ACT, including improvements to the bioreactors used to grow the cells. The Immunologic Monitoring and Cellular Products Laboratory (IMCPL) at UPMC Hillman Cancer Center was incredibly responsive as Dr. Kammula adapted his protocols to grow T lymphocytes using good manufacturing practices (GMP) at a new location. Only a few institutions around the world are using this approach and have these capabilities.

Dr. Kammula is currently using his experience with ACT in uveal melanoma as a blueprint for treating other cancers. Two new clinical trials using ACT as an antitumor immunotherapy began recruiting patients at UPMC Hillman Cancer Center in 2019. One trial is using ACT to treat biliary tract cancers (NCT03801083), and one is using ACT against a wide array of solid tumors. Biliary tract cancers include cancers of the bile duct (cholangiocarcinoma), gallbladder, and ampulla of Vater, are relatively rare, and carry a poor prognosis, similar to uveal melanoma. Dr. Kammula and his team have expanded TILs from metastases of biliary tract tumors and isolated cells with the appropriate reactivity to show proof of concept in the laboratory. Dr. Kammula hopes to enroll up to 10 patients per year. The trial is designed to evaluate outcomes after the first 15 patients before moving forward to an enrollment goal of 47 patients. Tumor response, duration of tumor response, disease-free survival, and overall survival will be assessed as study outcomes.

The second new trial of ACT examines the effectiveness of this therapeutic strategy against many different solid tumor types.

Dr. Kammula describes this trial (NCT03935893) as a “fascinating trial that will allow us to treat virtually any cancer.” The trial has 10 different arms including analysis of common (e.g., stomach, esophageal, colon, pancreas) and uncommon cancers (e.g., Merkel cell, neuroendocrine tumors) and serves as a novel treatment option for patients seen at UPMC Hillman Cancer Center. This ambitious trial is the only one of its kind in the world and is pioneering in its potential to explore ACT as a treatment for many types of cancer. As Dr. Kammula and his team examine tumor response and patient survival, they will also work to define the biologic signature of T cells reactive against each tumor type and determine if they can grow TILs from each unique cancer and use these cells for treatment.

Although Dr. Kammula is excited about the trial, which just began recruitment in May 2019, he anticipates that the majority of the cancers studied will not have triggered the immune response necessary to isolate good T cells for ACT immunotherapy. In anticipation of this outcome and to facilitate further research in the field, all tissue collected during the trial will be banked in a repository for sequencing and translational science efforts.

This sets the stage for an obvious next step: genetically engineering T cells when T cells appropriate for ACT immunotherapy cannot be isolated from cancer patients. In the laboratory, Dr. Kammula and his team are working to isolate single T cells with antitumor reactivity and clone the genes encoding the T cell receptor from each cell. These genes determine the T cell’s immunoreactivity. Dr. Kammula is isolating a number of these valuable genes to generate a library of tumor-reactive T cell receptors. He envisions a future where tumor-reactive T cells do not need to be isolated and expanded from each patient. Instead, tumor sequencing and HLA type would guide the clinical team as they “pick a receptor off the shelf,” insert it into the patient’s T cells, and expand the transformed cells for ACT immunotherapy. This molecular cloning and bioengineering project is a secondary goal of his large trial to use ACT against solid tumors. Working at UPMC provides a tremendous advantage during these efforts. Dr. Kammula and his team have great access to both primary and metastatic tumor samples.

Although ACT of TILs is a promising immuno-therapy, the vast majority of tumor-reactive TILs undergo cell death shortly after infusion, and only a small subset of TILs persists as long-lived memory cells. Animal models of ACT immunotherapies have demonstrated that if the cells are exhausted when they are removed for expansion, they grow poorly in the lab, work poorly when re-implanted, and exhibit telomere shortening and limited ability to produce ATP. Novel strategies are needed to enhance the metabolic fitness of the highly differentiated T cells needed for ACT immunotherapy. Dr. Kammula has an active research program exploring ways to bioengineer TILs to reprogram their fate following ACT. His studies in animal models suggest that metabolic reprogramming can augment the survival of TILs. Dr. Kammula is continuing these investigations through a funded NIH R01 grant, which began in July 2019, that focuses on reprogramming the mitochondrial metabolism. Dr. Kammula and his team are examining whether they can give TILs a metabolic boost using a gene therapy approach. This research will improve our understanding of T cell metabolism and determine whether bioengineering can be used to improve ACT. Dr. Kammula’s long-term goal is to develop clinically relevant approaches that promote the metabolic fitness of human TILs after adoptive transfer.

The paradigm of using selected immune cells as a cancer treatment is very new. The customized therapy goes against the convention of identifying antitumor drugs that might be useful in many patients. Dr. Kammula describes this work as “a bit of a Manhattan Project” as he and his team explore ACT immunotherapy against different tumor types, develop a molecular understanding of the underlying mechanisms, and develop gene therapies and bioengineering approaches to improve adoptive immunotherapy. In February 2018, UPMC announced a $200 million investment in the UPMC Immune Transplant and Therapy Center. Through this initiative, UPMC will promote innovation by fostering novel treatment approaches that harness the body’s natural defenses to fight cancer, harmful diseases and infections. ACT is an outstanding example of life-changing medicine through immunotherapy at UPMC.