University of Pittsburgh School of Medicine scientists today announced a potential vaccine against SARS-CoV-2, the new coronavirus causing the COVID-19 pandemic. When tested in mice, the vaccine, delivered through a fingertip-sized patch, produces antibodies specific to SARS-CoV-2 at quantities thought to be sufficient for neutralizing the virus.

The paper appeared today in EBioMedicine, which is published by The Lancet, and is the first study to be published after critique from fellow scientists at outside institutions that describes a candidate vaccine for COVID-19. The researchers were able to act quickly because they had already laid the groundwork during earlier coronavirus epidemics.

“We had previous experience on SARS-CoV in 2003 and MERS-CoV in 2014. These two viruses, which are closely related to SARS-CoV-2, teach us that a particular protein, called a spike protein, is important for inducing immunity against the virus. We knew exactly where to fight this new virus,” said co-senior author Andrea Gambotto, MD, associate professor of surgery at the Pitt School of Medicine. “That’s why it’s important to fund vaccine research. You never know where the next pandemic will come from.”

“Our ability to rapidly develop this vaccine was a result of scientists with expertise in diverse areas of research working together with a common goal,” said co-senior author Louis Falo, MD, PhD, professor and chair of dermatology at Pitt’s School of Medicine and UPMC.

The researchers also used a novel approach to deliver the drug, called a microneedle array, to increase potency. This array is a fingertip-sized patch of 400 tiny needles that delivers the spike protein pieces into the skin, where the immune reaction is strongest. The patch goes on like a Band-Aid and then the needles — which are made entirely of sugar and the protein pieces — simply dissolve into the skin. 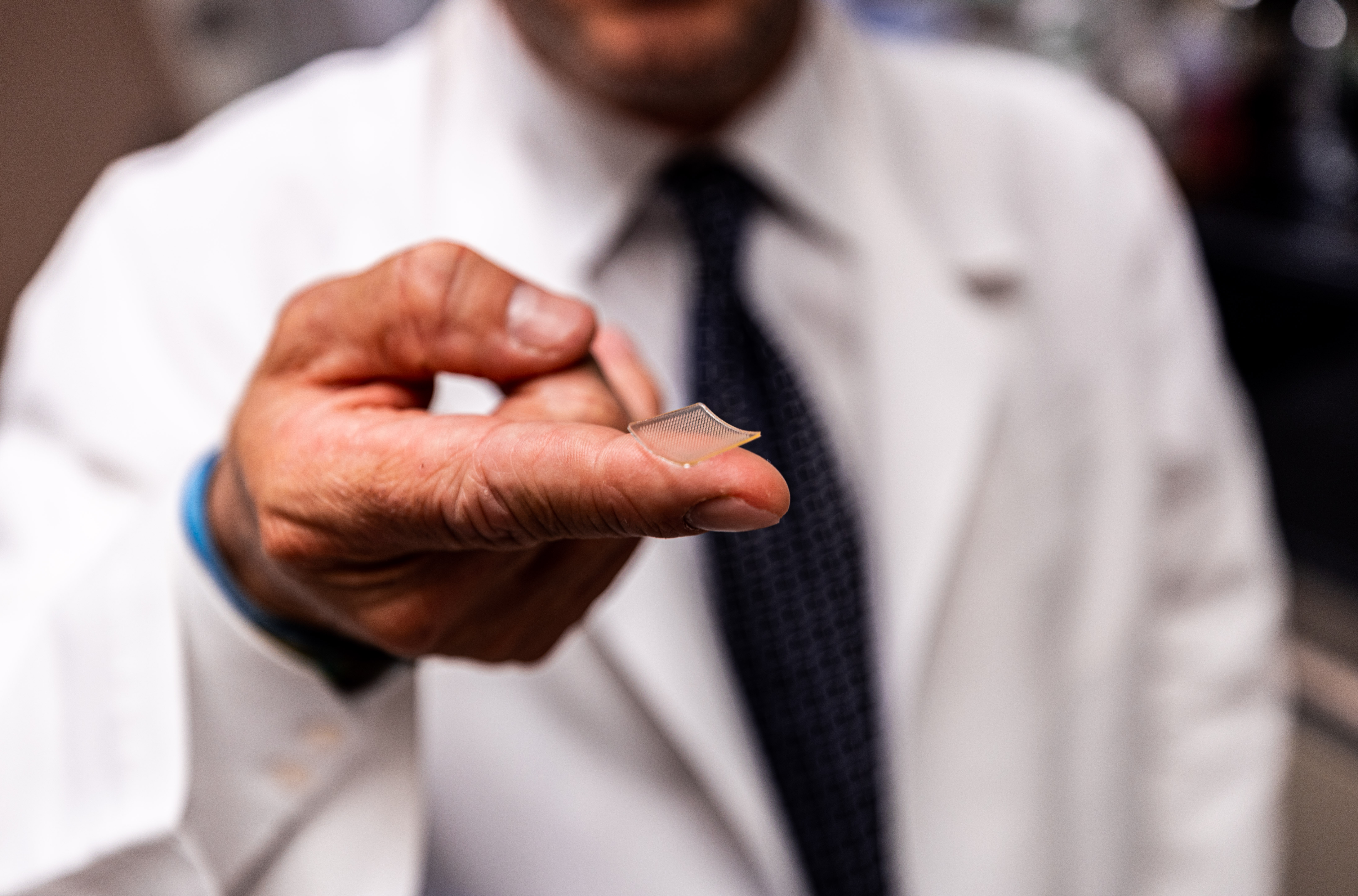 "We developed this to build on the original scratch method used to deliver the smallpox vaccine to the skin, but as a high-tech version that is more efficient and reproducible patient to patient,” Falo said. “And it’s actually pretty painless — it feels kind of like Velcro.”

The system also is highly scalable. The protein pieces are manufactured by a “cell factory” — layers upon layers of cultured cells engineered to express the SARS-CoV-2 spike protein — that can be stacked further to multiply yield. Purifying the protein also can be done at industrial scale. Mass-producing the microneedle array involves spinning down the protein-sugar mixture into a mold using a centrifuge. Once manufactured, the vaccine can sit at room temperature until it’s needed, eliminating the need for refrigeration during transport or storage.

“For most vaccines, you don’t need to address scalability to begin with,” Gambotto said. “But when you try to develop a vaccine quickly against a pandemic that’s the first requirement.”

When tested in mice, PittCoVacc generated a surge of antibodies against SARS-CoV-2 within two weeks of the microneedle prick.

Those animals haven’t been tracked long term yet, but the researchers point out that mice who got their MERS-CoV vaccine produced a sufficient level of antibodies to neutralize the virus for at least a year, and so far the antibody levels of the SARS-CoV-2 vaccinated animals seem to be following the same trend.

Importantly, the SARS-CoV-2 microneedle vaccine maintains its potency even after being thoroughly sterilized with gamma radiation — a key step toward making a product that’s suitable for use in humans.

The authors are now in the process of applying for an investigational new drug approval from the U.S. Food and Drug Administration in anticipation of starting a phase I human clinical trial in the next few months.

“Testing in patients would typically require at least a year and probably longer,” Falo said. “This particular situation is different from anything we’ve ever seen, so we don’t know how long the clinical development process will take. Recently announced revisions to the normal processes suggest we may be able to advance this faster.”