Anterior cruciate ligament (ACL) injuries are common, with an incidence of 68.6 per 100,000 person-years in the United States. Furthermore, more than 75% of individuals with an ACL injury undergo surgical treatment.1 Surgery is frequently recommended to avoid the development of subsequent meniscal tears, osteoarthritis, and a need for total joint arthroplasty associated with nonoperative management, particularly in young, active patients.2-4 Despite the steady increase in ACL research, questions persist regarding the optimal surgical technique for the treatment of ACL injuries, including the timing of surgery after injury, repair versus reconstruction, graft type, and bundle quantity with anatomic reconstruction.5-7 The purpose of this article is to summarize these current considerations among orthopaedic surgeons to better understand the nature and direction of research and clinical practice surrounding the surgical treatment of ACL injuries.

A landmark study in 1991 showed an increased incidence of knee arthrofibrosis after early ACL reconstruction within one week of injury compared to reconstruction performed within three weeks of injury.8 This led many surgeons to favor delayed reconstruction, as proposed advantages include the opportunity for concomitant injuries to potentially be treated nonoperatively and the opportunity for the injured knee to regain full range of motion (ROM) preoperatively, resulting in an earlier return of full ROM postoperatively.9 Some authors even recommend delaying surgery until two years after an ACL injury to minimize the risk of subsequent graft failure.10,11

However, recent studies have begun to challenge the advantage of delayed ACL reconstruction. In a recent systematic review and meta-analysis in which patients were grouped based on surgery performed prior to or after 10 weeks postinjury, no significant differences were found between patient-reported outcomes (PROs) or ROM, though improved Lachman and pivot shift examinations were seen at two and five years postoperatively in the early group when compared to the delayed group in one of three additional studies.12 Additional meta-analyses, with various definitions of early or delayed surgery, have found no clinically significant difference between early and late surgery regarding PROs, complications, ROM, reinjury, or residual laxity.13-15 Therefore, some surgeons are beginning to consider early surgical intervention to be a viable treatment option.

For years, ACL reconstruction involving the use of graft material to create an entirely new ACL has been the gold standard for surgical treatment of ACL tears. ACL repair in which the ACL tear itself is directly repaired (Figure 1) was largely abandoned in the 1990s due to a high incidence of postoperative pain, stiffness, instability, and repair failure in poorly selected patients. However, this approach has begun to make a resurgence.16-19 Proponents argue that ACL repair provides the advantage of a less invasive approach while preserving the native biology, proprioception, and anatomy of the ACL.17,18,20 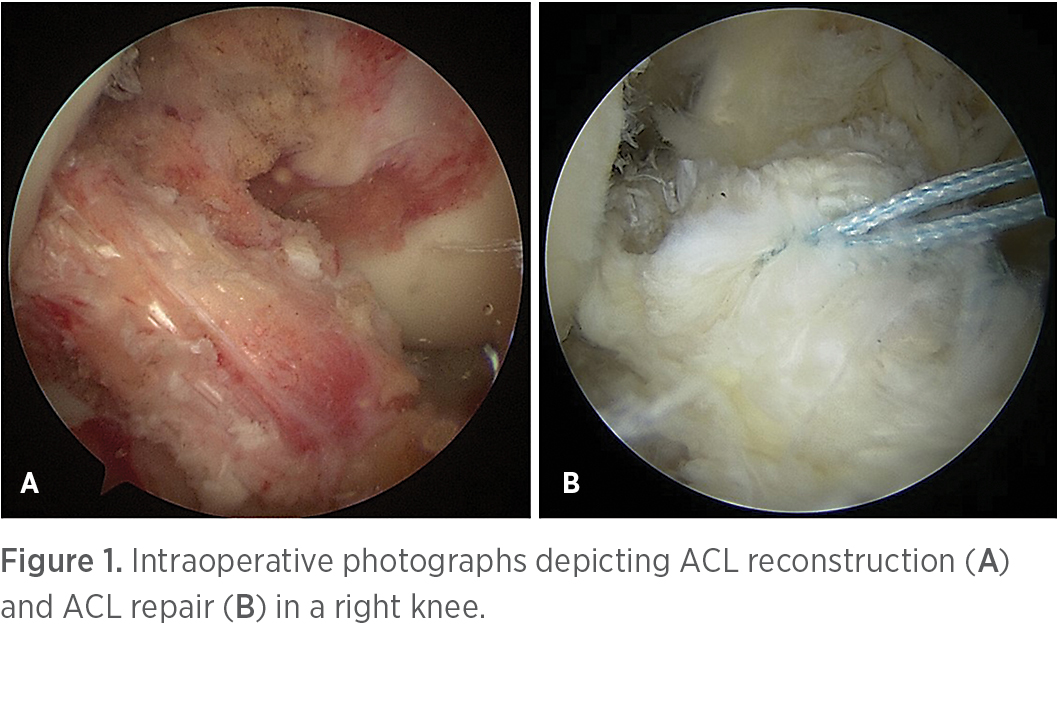 While results of ACL repair in all patients have unacceptably poor outcomes, there is evidence that early repair of proximal ACL tears within two to four weeks of injury in young patients may result in outcomes similar to ACL reconstruction.21 In addition, internal bracing and biologic augmentation of primary ACL repair have been shown to improve healing as seen on histology and the biomechanical properties of the repaired construct, but these findings have not yet been translated to clinical outcomes.21 Jonkergouw found no significant difference in regards to failure, reoperation rate, or PROs for patients undergoing ACL repair with and without internal bracing in patients with isolated complete proximal ACL tears.17 van der List found that when comparing primary ACL repair with reconstruction, ACL repair resulted in significantly improved early ROM prior to six months, which disappeared at six months.18 However, it is important to note that only patients with proximal ACL tears underwent ACL repair, while patients with midsubstance tears, or with concomitant pathology, received ACL reconstruction. While ACL reconstruction has been the preferred surgical treatment for ACL tears for the last few decades, ACL repair is once again being viewed as a reasonable alternative with several advantages in carefully selected patients.

Another area of much research and debate surrounds the determination of optimal graft type used in ACL reconstruction. ACL grafts are broadly broken down into two main categories: autograft and allograft, with each having a variety of options available. Autograft options include autograft bone-patellar tendon-bone (BPTB), hamstring tendon (HS), and quadriceps tendon (QT). Allograft options include BPTB, HS, or QT allograft, as well as tibialis anterior or posterior, peroneus longus, or Achilles tendon allograft.

Numerous studies have been performed to compare the various graft types, but no graft option has emerged as the optimal choice. A recent review found no significant difference in graft failure rate among the use of QT, BPTB, or HS autografts in primary ACL reconstructions, while others have shown a decreased rate of failure when using BPTB rather than HS autograft.22-24 In revisions, HS autograft studies have been shown to have a lower rate of complication and reoperation compared to BPTB.25 While Gorschewsky found superior knee function and stability outcomes using BPTB rather than QT with bone block autograft, the majority of studies show QT to be minimally superior or equal to BPTB in regards to postoperative knee laxity, ROM, and PROs.26-28 Likewise, studies comparing QT and HS autografts have shown that QT autograft resulted in minimally superior to equivalent PROs and knee stability.22,29-31 When comparing BPTB and HS autografts, BPTB has been found to be superior in regards to decreased laxity with pivot shift testing and return-to-preinjury activity level.32 In comparing autograft versus allograft, BPTB autograft was found to have a significantly lower rate of revision ACL reconstruction compared to BPTB allograft and has been shown to be superior to various allograft options in young, active patients.33-35 No difference has been shown between the use of HS autograft versus nonirradiated allograft.25 Thus, no clear advantage is seen in knee stability, clinical outcomes, complications, or graft failure among graft types, except for BPTB autograft in young, active patients.

As a result, graft choice is determined by various other factors, such as lack of donor site morbidity or risk of disease transmission with allograft, increased risk of anterior knee pain associated with BPTB autograft, relative decreased hamstring strength seen with HS autograft, or surgeon recommendation.22,27,28,31,32,36 Therefore, while many options exist, no graft choice is clearly superior. Further study is needed to determine the best graft options for patients.

One Bundle or Two?

When performing an ACL reconstruction, there is a choice to use a graft consisting of a single-bundle (SB) or double-bundle (DB) (Figure 2). While reconstruction with a DB graft recreates the anatomy of the native ACL, there are instances where the use of a DB graft is impossible, as in cases with a small tibial insertion site, narrow notch, open physes, advanced arthritic changes, and severe bone bruising.37-39 In the majority of studies comparing anatomic SB with anatomic DB ACL reconstruction, DB reconstruction has been found to result in greater knee stability, though improved patient outcomes have not been shown.39-44 Regarding complication or failure rates, meniscal injury, and progression of arthritis, some studies have shown the superiority of DB in comparison to SB reconstruction, although the results are mixed and the quality of data is limited, so additional evidence is needed.41,43,45-47 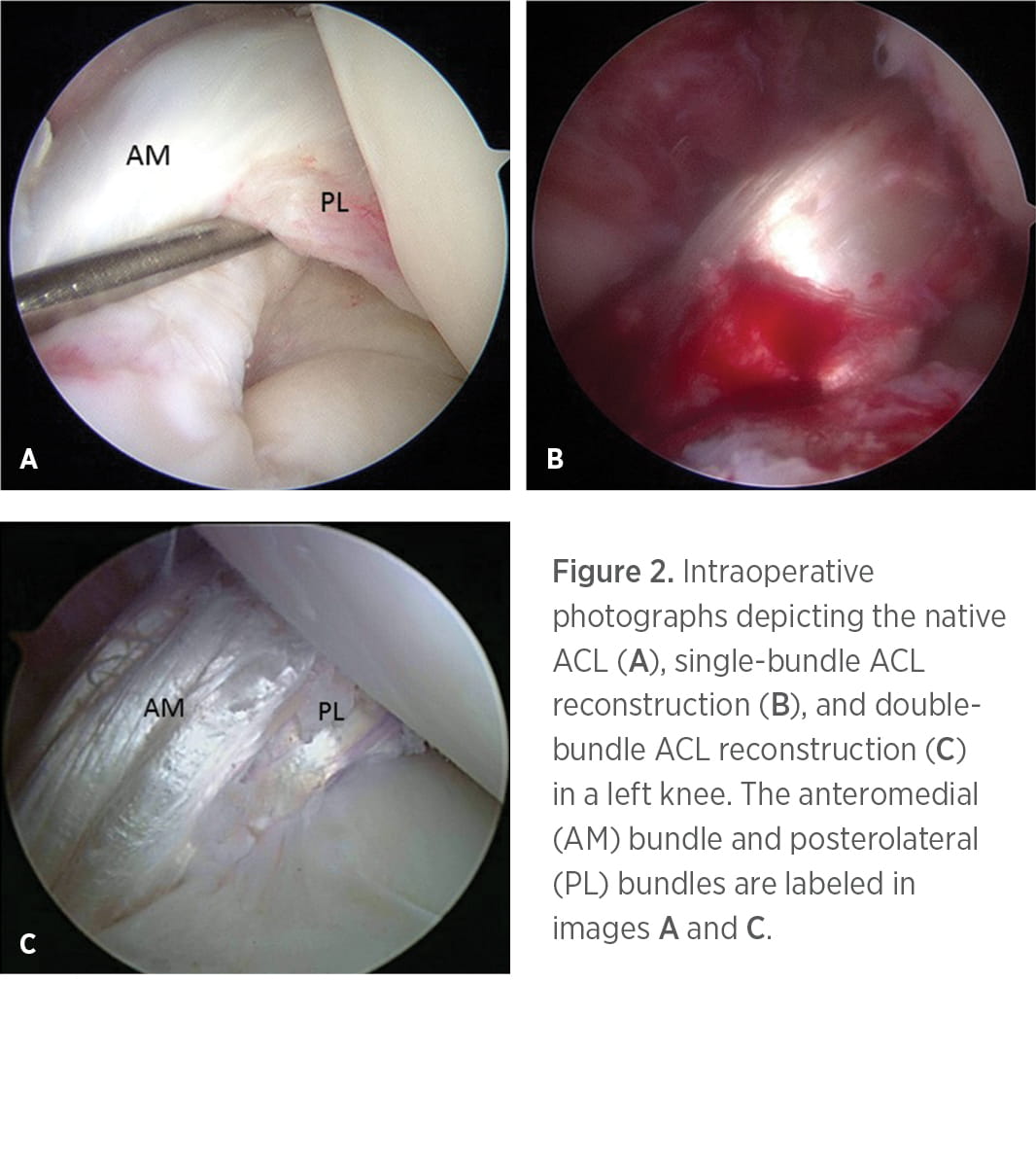 Much discussion and debate exist as to the best method of surgical treatment for ACL injuries. While surgical timing, ACL repair versus reconstruction, graft type, and bundle number with anatomic reconstruction do not represent every issue currently being addressed, these do represent some of the topics at the forefront of discussion today. Continued research is necessary to uncover the answers to these important questions to determine the best surgical treatment strategies that will lead to the best outcomes for patients.