The net cost of prescription drugs — meaning sticker price minus manufacturer discounts — rose over three times faster than the rate of inflation over the course of a decade, according to a study published today in JAMA. It’s the first analysis to report trends in net drug costs for all brand-name drugs in the U.S.

The study is one of three manuscripts by researchers in the Center for Pharmaceutical Policy and Prescribing (CP3) at the University of Pittsburgh’s Health Policy Institute published in this week’s special issue of the journal, which focuses on prescription drug costs.

“Previously, we were limited to studying list prices, which do not account for manufacturer discounts. List prices are very important, but they are not the full story,” said lead author Inmaculada Hernandez, PharmD, PhD, assistant professor of pharmacy at Pitt. “This is the first time we’ve been able to account for discounts and report trends in net prices for most brand name drugs in the U.S.”

Hernandez and colleagues showed in past research that list prices for prescription drugs have increased steadily over the past decade.

In the new analysis, the team used revenue and usage data for 602 brand-name drugs to track list and net prices from 2007 to 2018. Inflation-adjusted list prices increased by 159%. Net prices, which account for rising manufacturer discounts, including rebates, coupon cards and 340B discounts, increased by 60%. That’s 3.5 times general inflation. 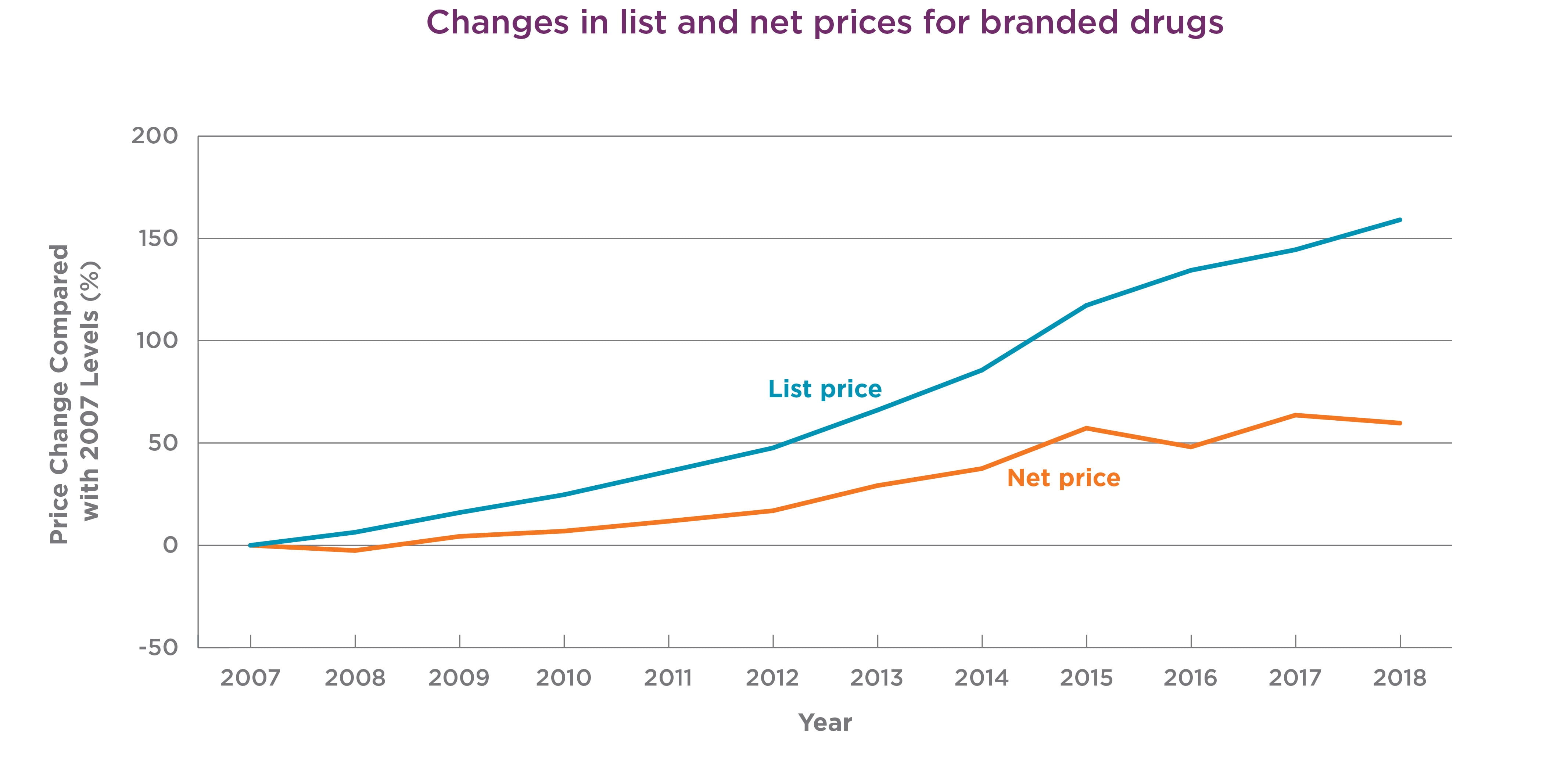 “Net prices are not necessarily what patients pay,” said senior author Walid Gellad, MD, MPH, associate professor of medicine and health policy at Pitt and director of the CP3. “A lot of the discount is not going to the patient.”

That’s because the vast majority of the discount likely consists of rebates paid directly to public and private insurers. Rebates don’t usually affect the amount patients pay through copays or coinsurance, which are based on list price, not net. 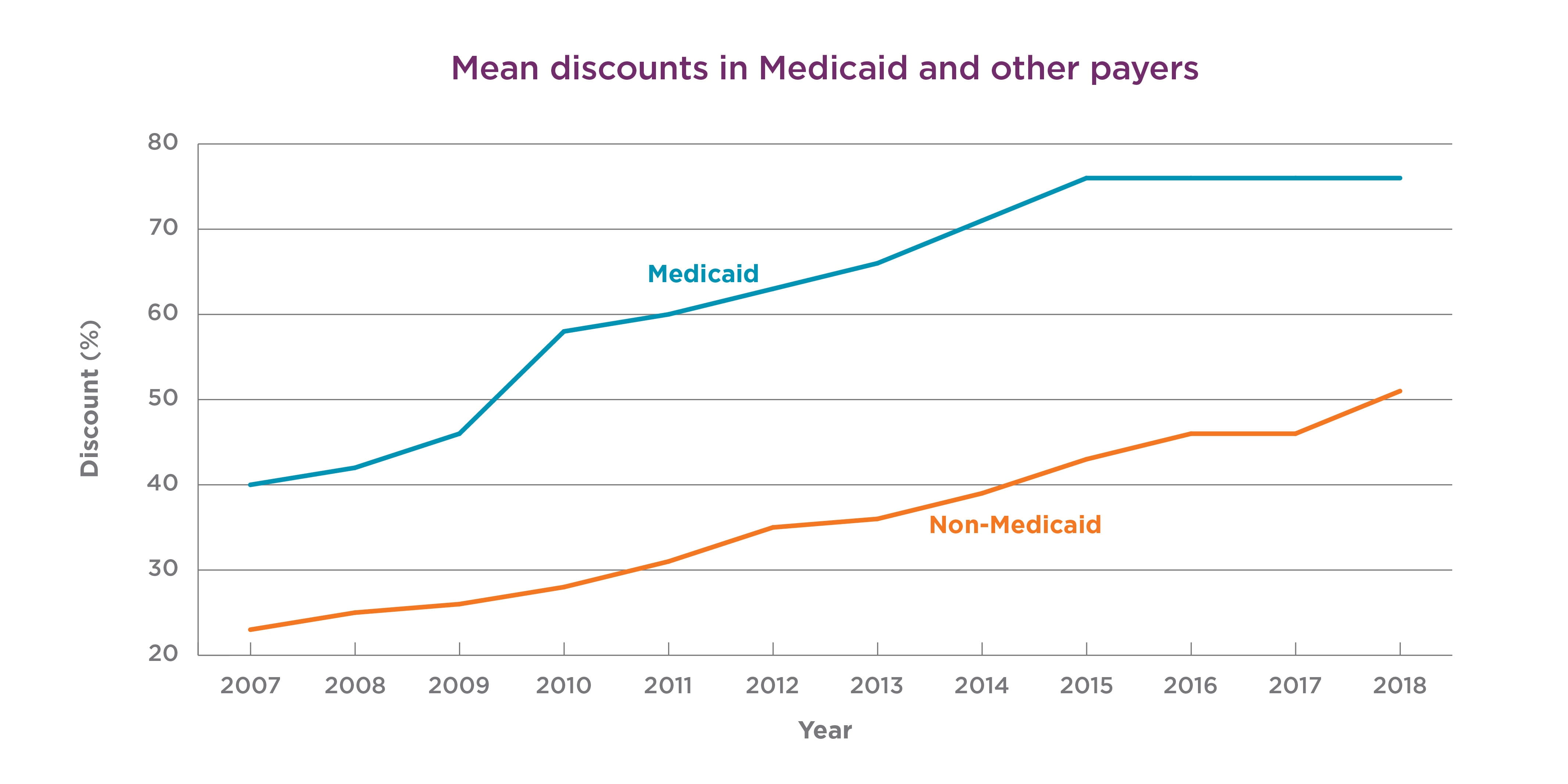 Beneath the overall trends, there was large variability across different drug classes. In some cases, such as insulins or TNF inhibitors, there was a widening gap between list and net prices. In others, such as cancer drugs, list and net prices increased in parallel. Multiple sclerosis treatments were an exceptional case, where even after discounts, net prices more than doubled over the decade in inflation-adjusted dollars.

The study also shows that discounts are much larger for Medicaid than for other payers, likely reflecting regulation, including the mandatory Medicaid rebate based on price increases over inflation. Discounts for other payers are based on negotiations.

The Senate Finance Committee is considering a bill that would add price inflation-based rebates to Medicare, similar to Medicaid.

“We’re seeing a lot of discussion that net prices have stabilized over the last few years, and that does appear to be the case,” said Gellad, who also is a physician and researcher with the VA Pittsburgh Healthcare System. “But the stabilization of net price comes on top of large increases over the last decade, many times faster than inflation, for products that have not changed over this time period. In addition, this net price is an average, with substantial variability across payers and drugs.”

Additional authors on the study include Alvaro San-Juan-Rodriguez, PharmD, from Pitt; and Chester Good, MD, MPH, from the UPMC Health Plan.

Hernandez disclosed fees paid to her personally by Pfizer, for services unrelated to the scope of this work.

The two other papers from CP3 that will appear in this issue of JAMA are a viewpoint piece on how drug pricing may affect drug shortages, and a research letter documenting  the proportion of gene therapy clinical trials performed by academia, the National Institutes of Health and the pharmaceutical industry.