Telemedicine and Neonatology: Expanding Services for Newborns in Need

Modern technology is bridging the distance between neonates and neonatology at UPMC Children’s Hospital of Pittsburgh and UPMC Magee-Womens Hospital. By utilizing state-of-the-art video conferencing technology that is comprised of two-way, secure, real-time interactive communications, the UPMC Newborn Medicine Program physician can virtually evaluate newborns at remote sites any time of the day or night.

The telemedicine program at UPMC Children’s consists of the following services:

Telemedicine brings the Neonatal Intensive Care Unit (NICU) to the patient’s bedside to help newborns get the care they need in their home communities, and it can be used to facilitate transfer to UPMC Children’s for the sickest infants. The program also allows infants in a level II NICU to receive neonatal care at their local hospitals that are closer to their families, thus minimizing the incidence of unnecessary transfers and reducing associated health care costs.

The telemedicine technology employed by UPMC Children’s also has the benefit of being able to be used for educational purposes. The UPMC Neonatal Telemedicine program continues to provide remote continuing educational opportunities for nurses, respiratory therapists, and physicians at community hospitals. “Our goal is to strengthen and formalize our CME offerings through virtual conferences and the like to all members of the neonatology team — physicians, nurses, respiratory therapists, and other disciplines,” says Abeer Azzuqa, MD, one of the neonatologists at UPMC Children’s. 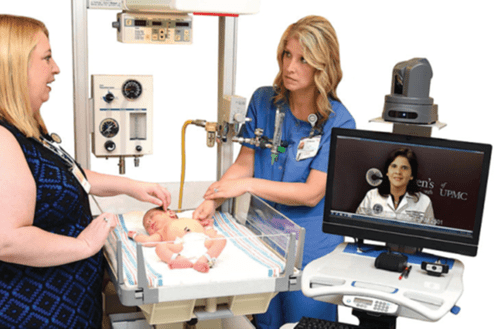 On the Horizon: International Outreach

Dr. Azzuqa explains that the next few years are likely to see an expansion of neonatal telemedicine services on the international stage. The focus during the first few years of the program has certainly been on the immediate communities in and around western Pennsylvania. However, as she and her colleagues have worked to perfect the programs and expand the services offered through the telemedicine platform, and as UPMC as a system has invested heavily in telemedicine technologies for a growing contingent of specialties and locations, branching out internationally is a likely next big step to bring the clinical expertise of the neonatology programs at UPMC to the wider world.

“Such advanced technology infrastructure and leading-edge methods mean health care providers can deliver the same high-quality care through remote and virtual means as they do through face-to-face interactions,” says Dr. Azzuqa. “It’s real-time communication between the neonatologist based in Pittsburgh and the medical staff based in Altoona,” she says. “State-of-the-art digital technologies allow us to provide complex newborn care through remote and virtual means anytime it’s needed.”